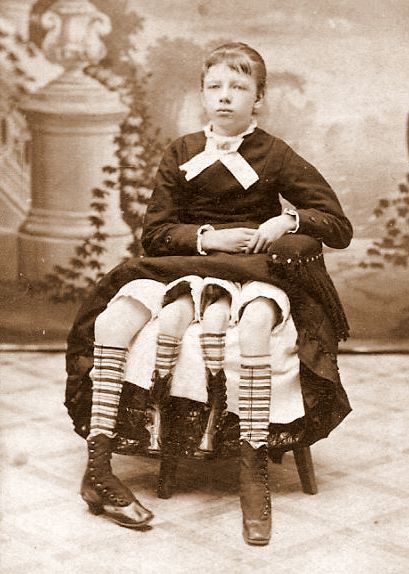 Josephine Myrtle Corbin (May 12, 1868 in Lincoln County, Tennessee – May 6, 1928 in Cleburne, Texas) was born a dipygus. This referred to the fact that she had two separate pelvises side by side from the waist down, as a result of her body axis splitting as it developed.

Each of her smaller inner legs was paired with one of her outer legs. She was said to be able to move her inner legs, but they were too weak for walking.

Corbin’s parents were William H. Corbin, aged 25 at the time of his daughter’s birth, and Nancy Corbin (née Sullins), aged 34.

Both parents were described by physicians who examined the infant shortly after her birth as being very similar in appearance, “both having red hair, blue eyes, and very fair complexion”; in fact, they looked so similar that the physicians felt compelled to point out that they were not “blood kin”. The Corbins had four sons and four daughters in total, including a daughter from Nancy’s first marriage.

The infant Myrtle’s birth was not marked by anything “peculiar about the labour or delivery” according to her mother, which was itself a stroke of luck: doctors who examined the child shortly after her birth noted that a breech presentation “would have proved fatal to the infant, and possibly to the mother.”

Corbin soon showed herself to be a strong child, weighing 10 lbs three weeks after her birth, and it was reported in a journal published later that year that she “nurses healthily” and was “thriving well”.

Corbin entered the sideshow circuit with the moniker “Four-Legged Girl from Texas” when she was 13 years old; one of her first promotional pamphlets described her as being as “gentle of disposition as the summer sunshine and as happy as the day is long.”

Her popularity in this industry was such that other showmen turned to exhibiting four-legged gaffs (falsified performances) and once Corbin herself was no longer performing, there were several phony four-legged women to whom audiences could turn. At the age of 19 she married Clinton Bicknell. 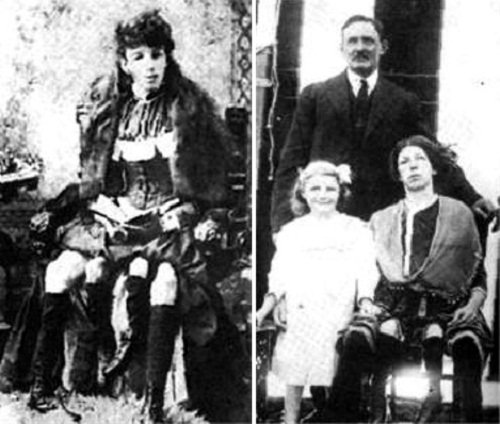 In the spring of 1887, approximately a year after marrying Bicknell, Corbin became pregnant for the first time: her condition was discovered by Dr Lewis Whaley, of Blountsville, Alabama, who was sent for after Corbin had experienced pain in her left side, fever, headache, and a decreased appetite.

In addition, the physician noted that “vomiting and amenorrhoea had persisted for two months”. Whaley went on to write up the case for the Atlanta Medical and Surgical Journal, which led to a resurgence of interest in Myrtle throughout the late 1880s, now known in medical journals as ‘Mrs. B.’

Examining Corbin, Whaley discovered that the duplication of her external sexual organs was mirrored by a similar duplication internally. He determined that it was in her left uterus that Mrs. B. was pregnant.

According to Whaley, upon being told that she was pregnant, she replied in disbelief, saying “If it had been in my right side I would come nearer believing you are correct.” From this comment, physicians determined that Corbin preferred intercourse in the right side, and this fact was commented upon in several subsequent reports.

The pregnancy caused Corbin to become gravely ill, and after consulting with colleagues, Whaley decided to perform an abortion eight weeks after her initial examination (she was, reportedly, between three and four months pregnant at the time) She made a full recovery, and the procedure (as well as her unique anatomy), did not prevent her from successfully carrying future pregnancies to term.

As medical journals across America and around the world turned renewed attention to a now mature Corbin, details about her personality revealed a sense of the woman herself: one article noted that “The lady, Mrs. B…. the Myrtle Corbin of days gone by, [is] attractive in face, physically well, and able to attend to all her household duties”, while she was described elsewhere as being “very intelligent” and “a refined woman, of some musical taste.”