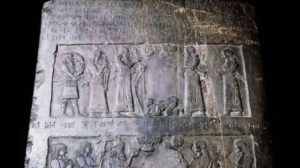 The scientist claims that thanks to archaeological discoveries, it is possible to prove the historical accuracy of the Bible.

The vast amount of archaeological discoveries made in recent years have been used to prove the truth of the biblical stories. One such situation is the presence of a description of the Black Obelisk of Shalmaneser III, who was the king of Assyria around 859-824 BC.

The obelisk, which is already 2,800 years old, contains many images and inscriptions that tell about the reign of the king.

It is worth noting that this is the most complete Assyrian obelisk that archaeologists could find. Experts also add that it contains an image of one of the biblical characters, the Israeli king Jehu.

Tom Meyer believes that the obelisk can be attributed to the number of biblical sources. He confirms once again that the Holy Scriptures are accurate.

One of the obelisk panels depicts a man kneeling before the king. After deciphering the inscription that accompanies the image, it became clear that this is Jehu who bowed before Shalmaneser III. Behind him, a group of servants presenting tribute to the king.

Findings like these during archaeological excavations confirm that the Bible is indeed historically accurate. For all the time, scientists have already managed to find a fairly large amount of evidence that the Holy Scripture speaks the truth, and much of this really happened in reality. Moreover, all dates are also indicated as accurately as possible.