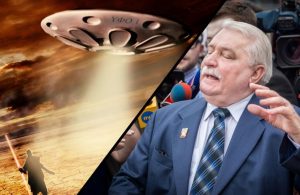 Former Polish President Lech Walesa, who ruled the country from 1990 to 1995, made a speech recently, during which he surprised his listeners.

Speaking to a group of compatriots in the city of Krosno, the politician suddenly started talking about unidentified flying objects and the possibility of an alien invasion of Earth. It turns out that the former head of the European state not only believes in extraterrestrial life, but also considers it potentially dangerous for the human race.

In particular, Walesa said that in the Universe there are three types of intelligent life, and people are still at the lowest level.

This means that more advanced aliens will easily conquer the Earth if they so desire. According to the Polish politician, “green men” are able to throw humanity back five thousand years ago, and we will have to re-create and develop our civilization.

Moreover, the former president is convinced: four or five times in the entire history of the Earth, people have already reached at least the same level of development as we have today, but Something has consistently thrown our civilization thousands of years ago.

Numerous ancient artifacts found during archaeological excavations in various parts of the world point to this. Of course, Walesa suspects that it was the aggressive aliens who every time prevented our ancestors from progressing further in their development, since this was not part of their plans to colonize our planet.

An amazing statement by a political leader pushes a logical question: how does a Pole know such fantastic information? Did he find out about it, holding the position of head of state?

The speech of the former president was expectedly caused quite a stir among world ufologists. It is not every day that individuals involved in high politics recognize the existence of intelligent life on other planets and openly talk about aliens.

Former Polish president warned about the threat of an alien invasion (in Polish language):