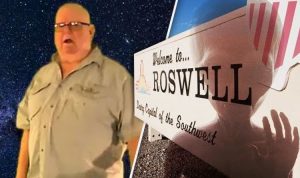 Robert Miller states to have served in Area 51 and also he is known for his research on UFOs, as well as being employed by the U.S. government at some point in his career.

Millers said he had the ability to fly an alien ship with his own mind’s power and he was able to travel in time.

He finally decided to tell the world about his experience and expose the truth about all of the American government’s experiments that have been kept secret for so many decades.

He says: “I do remember they brought me inside the craft and up to the pilot’s seat. There was only room for one person in the giant craft.

“I looked around the cockpit and only saw a seat.

“No joystick, no steering wheel, no other controls. There was, however, a helmet. They told me the craft was controlled telepathically.

“I was told to imagine the craft starting to float off the ground, but it didn’t work.

“Instead I had to imagine that I was the craft, like part of it, and I began thinking of myself floating off the ground and I felt the vibrations.”

Mr Miller also suggested that he may have experienced time-travelling after blacking out during the experience.

“I was 500ft off the ground, then the vibrations of the engine stopped. There was no ejection button on the craft. I was effectively helpless.

“[The craft] was plunging towards the ground and I went unconscious.

“The next thing I knew I was in hospital. A man in a black suit came in and explained to me what happened. He said right before the craft hit the ground, it just went, boom, disappeared.

“Then in the middle of the night, they heard a loud crashing noise outside, the craft had crashed in the same spot.

“The scientists had hypothesised that the craft had time-travelled.”