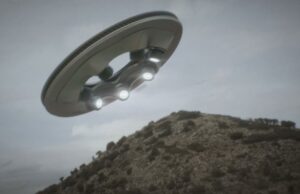 The Soviet Union took UFOs seriously. The KGB and the Soviet Defence Ministry had dedicated units collecting and analysing information about paranormal activity. Military experts even claimed to know how to “summon” UFOs and make contact with them.

Russian Prime Minister Dmitry Medvedev once was asked an unusual question. A REN TV correspondent asked him, as a former president, if it was true that, together with the nuclear briefcase, the head of state was presented with a classified folder with materials about UFOs.

Dmitry Medvedev said this was true. According to the prime minister, in addition to the folder, the head of state was presented with a report from the secret services, whose task it was to control the aliens on Russian territory.

When asked by journalist if there were many aliens living among us, Medvedev refused to elaborate, “so as not to create a panic.” However, he did suggest that those interested in the subject watch a “documentary chronicle” called “Men in Black.”

Of course, this response can be treated as a joke. Seriously speaking, however, both in the Soviet Union and in modern Russia, the topic of UFOs and other paranormal phenomena was and still remains classified –and none of the officials will ever say anything about it publicly.

On the other hand, there are experts who no longer hold any senior posts and therefore have more room to maneuver. Some former, high-ranking Soviet military officials have recently decided to lift the veil of secrecy on the mystery of UFOs.

It happened at end of March, at the Zigel Readings conference named after Felix Zigel – a Soviet astronomer and mathematician who is largely credited with being the founder of ufology in Russia. This biannual event has been held in Moscow for more than 20 years and is devoted to the study of paranormal phenomena.

For many years, reports of UFO sightings were treated in the Soviet Union as non-science, or fiction not worthy of attention from serious scientists. Only a few enthusiasts like Felix Zigel realized that those facts needed to be studied seriously.

In the 1960s, Zigel delivered many public lectures on the topic, thus prompting volunteers to join in the task of collecting information on unidentified flying objects.

The watershed moment for the official attitude toward UFOs came in 1978, when hundreds – if not thousands – of people in Petrozavodsk witnessed a strange luminous object in the sky for several hours.

The local emergencies services were inundated with letters and calls from frightened members of the public. Even neighboring countries asked the Soviet Union to explain what mysterious military exercise it was holding.

The last straw was a letter from the academic Aleksandrov –the founding father of Soviet nuclear power plants – claiming that it would be a mistake to keep ignoring this issue. According to him, it was necessary to set up special programs to study these phenomena.

The source for this story is a retired FSB major general and researcher with an Academy of Security, Defense and Law, and Order Issues, Vasily Yeremenko. At the time, Yeremenko was in charge of the KGB division overseeing the air force and aircraft manufacturing. It was his division that was entrusted with the task of collecting all reports of UFO sightings.

By that time, as Yeremenko told RBTH, there had been an accumulation of reports on numerous paranormal incidents. Missile Troops units were even instructed on how to behave in the event that they spotted a UFO: the main thing was not to act in a way that could create an opportunity for retaliatory aggression.

In the early 1980s, an experiment to “summon” a UFO was staged at a military range in Astrakhan Region. By then, experts had realized that UFOs were frequently sighted in areas of “heightened tension” – for instance, during weapons tests, or when there was a lot of military hardware gathered in one area.

“One could say that, during that experiment, we learned how to summon a UFO. To achieve that, there would be a sharp increase in the number of flights performed by combat aircraft and a lot of movement of hardware. Then UFOs appeared with a probability of nearly 100 percent,” Yeremenko said. According to him, most of the objects looked like luminous spheres.

Over time, all the participants in the experiment became so used to these phenomena that they took them for granted. Some even tried to make contact with the objects.

In the end, the military, together with the scientists who took part in the experiment, came to three main conclusions. First, these may be natural phenomena that modern science is not yet able to explain. Second, these may be U.S. or Japanese reconnaissance equipment. Finally, these may be extraterrestrial objects.

These days, UFOs have been relegated to the pages of sensationalist tabloids. That is why, as Yeremenko believes, serious scientists do not dare make their attitude toward this issue known and remain silent.

In private conversations with pilots and cosmonauts, he has more than once heard stories of UFOs – yet they do not want to speak about it publicly. Still, the expert is convinced that this issue should be taken seriously as a matter of security.﻿

UFO Sightings, Crashes, and Cover-ups: Will We Find the Truth?