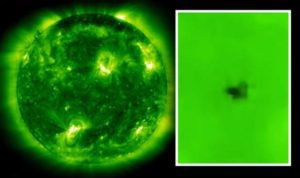 A strange object was discovered near the Sun. What is it really, no one can answer yet.

This mysterious object has been in the same place for more than a month. If this is actually an alien ship, then how can it be so close to the Sun for so long and during all this time not reach an incredible temperature?

Studying the images was done by ufologist Scott Waring. He noted the fact that the object has been near the Sun for a long time and only occasionally shifts slightly to the right or left.

Waring is confident that this object is located in orbit and can be an alien ship. The ufologist has been watching it for 9 months.

Waring said: “The object is still there. Some people try to say its not a craft, but a dark spot on the Sun. This is not possible, since the Sun is rotating below the UFO.”

Perhaps NASA hoped that no one would notice a dark triangular object in the orbit of the Sun, which is about the size of the moon.

A video was also posted where the given object is very clearly visible, but no one can say exactly what origin it has.

The on-going space mystery is available to anyone at www.helioviewer.org for free.