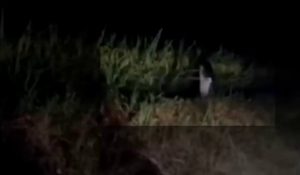 Spooky footage of a single-legged ghost of Thai mythology has been seen more than 3,5 million times recently. In Thailand, the Gong Goi is a mythological spirit of the child living in the forest.

It appears to be roughly humanoid but has a single central leg on which it hops. It has long dark hair and gets its name from its tendency to shout ‘Gong Goi!’

This latest viral video, uploaded by Chantha Sitouluk on Facebook, allegedly shows an elusive specter hopping on the side of a road illuminated by a car’s lights. But is that proof of the legendary Gong Goi or is something else happening?

While a large number of viewers in Thailand appear to be completely convinced by the footage, it certainly seems possible that what the video shows is someone dressed as a ghost.

You can check the clip below for yourself.