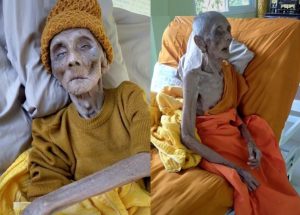 Internet is puzzled by a video with a “163-year-old monk” who allegedly practices self-mummification, reports the Daily Star.

A series of videos appeared on TikTok on the user page @auyary13. The submissions show an elderly person receiving care at a hospital in Thailand.

His extremely fragile appearance made everyone talk about his age. Against this background, there were rumors that the man is 163 years old and he practices the technique of self-mummification, popular among Buddhist monks.

His granddaughter, who is a videographer, has 530,000 followers on her TikTok page. But the question remains, is there any truth to the claims about his age or that he practices self-mummification?

As it turned out later, the man is actually 109 years old and his account is managed by his granddaughter to report on his health.

According to the Daily Star, not so long ago, a resident of Thailand, who is considered a monk, was admitted to the Dan Khun Tot hospital due to a fractured femur, but he is already on the mend.

Recent videos even show that his health is improving. He can eat, play sports and visit his family. One of the videos, where a long-liver lies in bed with his hands on the head of a child, received a staggering 66 million views in a week.

Sokushinbutsu is a practice that was most widespread in the Japanese province of Yamagata between the 11th and 19th centuries among the monks of the Shingon school.

The last recorded case was in 1903. In total, 24 well-preserved mummies of Japanese monks who underwent this procedure are known. It is assumed that for all the time the death toll reached several hundred people, but most of the bodies were not reliably mummified.

A rare practice among Buddhist monks involves a grueling regimen of self-discipline. Sokushinbutsu involves a strict diet where the monks dehydrate their bodies from the inside out, getting rid of fat, muscle and moisture before being buried in a pine box to meditate during their last days on Earth.