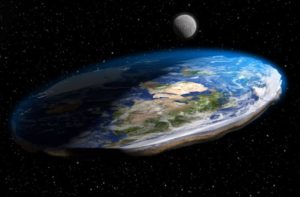 A new look at the shape of the planet Earth was presented by the famous hyperrealist physicist Matthew Boylan. The scientist worked for many years as the operational graphics manager for the US aerospace agency NASA.

Matthew Boylan worked on creating computer graphics for NASA, which is a kind of deception. He produced photorealistic space images, which, according to the agency, are real photographs from space. But suddenly, the scientist quit his job and declared that he believed in the “flat earth” hypothesis.

He says he decided not to descend into their world of deception and began speaking out when he was no longer hired by NASA and feared for his life.

According to Matthew, NASA exists to promote the idea that the picture of the world is spherical heliocentric. During a conversation with reporters, he once said that he saw photographs in which the Earth is flat.

Matthew Boyland claims that the Earth from space does not look exactly like people used to see in the pictures that he himself created while working at NASA. And realistic pictures of the planet, supposedly made from space by different devices, are actually just computer graphics.

A straight horizon line can also be seen in the images of Soviet cosmonauts. They took photos from space without the now popular fish-eye technology, and the Earth did not look convex, but straight.

This refutes the information indicated in the textbooks, since from this height the planet should look convex.

It is also doubtful that the image on the UN emblem corresponds to “flat Earth”. On the emblems of various globalist organizations, the Earth looks flat and centered on the North Pole.

Members of the Flat Earth Society and other flat-Earthers claim that NASA and other government agencies conspire to delude the public into believing the Earth is spherical.

The publicly perpetuated image is kept up through a large-scale practice of “compartmentalization”, according to which only a select number of individuals have knowledge about the truth.