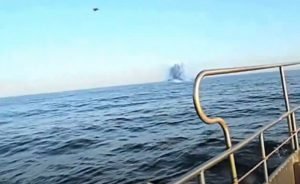 This is probably the best and most interesting UFO sighting. that has ever been captured on camera. Probably because the fisherman and his crew were in the right place at the right time.

The video, filmed by Spanish fishermen, was first published on the Internet about 10 years ago. In the published video, a UFO escapes from military aircraft diving into the ocean.

This UFO encounter gave birth to its own mythical status around government cover-ups. This time it will not be about the United States, but about the Spanish government.

In fact, the Spanish Air Force was involved, and as we can see, they are ruthlessly pursuing this mysterious object. Until the object literally gets tired of playing and dives right into the ocean, right in front of the fishermen.

A Galician fisherman has decided to go public with what he says he experienced while on his boat.

While some military planes are chasing a “foreign object” which falls into the sea and makes a spectacular dive, a helicopter of unknown origin flies over the boat and orders the fishermen to hurry up and get out of where they are.

“Posting this video after much deliberation, but feel it my duty to report that this happened and see no explanation”, says the author of the video.