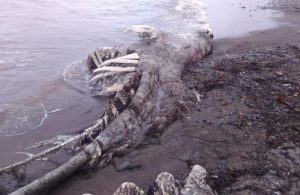 The weight of the mysterious fish was such that three strong men could not pull it aboard the boat. The fishermen decided to go ashore, and there, aground, try to pull the prey from the water, reports esoreiter.ru.

The fishermen were at a loss when approaching the shore, they saw how huge tusks protruding from the body of the animal rose above the water.

The carcass of an unknown creature recovered from the ocean lay for several days. What kind of creature it was, the fishermen did not understand. Only now, men began to realize that they were at great risk trying to catch this creature, because in defense, it could easily overturn the boat and attack them.

Experts who arrived at the site could not identify the mysterious animal. One of them suggested that the fishermen caught a real spinosaurus, which for many millennia lived and hid in the depths of the Pacific Ocean. 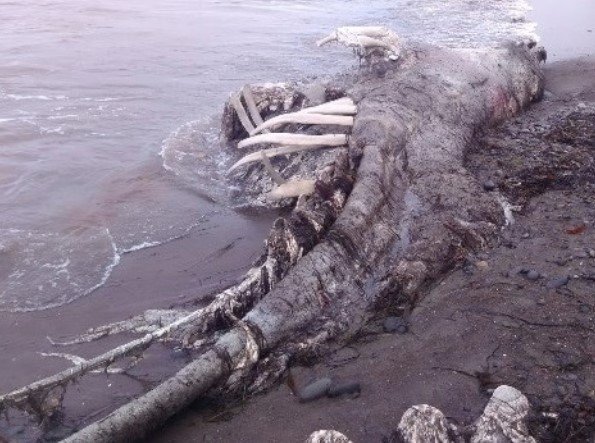 Researchers were most confused by the presence of tusks in the animal, which were evenly distributed along the body with a frequency of 30 centimeters.

Spinosaurus (meaning “spine lizard”) is a genus of theropod dinosaur that lived about 112 to 93.5 million years ago. Spinosaurus is known to have eaten fish, and most scientists believe that it hunted both terrestrial and aquatic prey; evidence suggests that it lived both on land and in water as a modern crocodilian does.

Now scientists are trying to figure out what kind of animal it is and whether there is a real danger for fishermen to fish off the coast of Sakhalin.