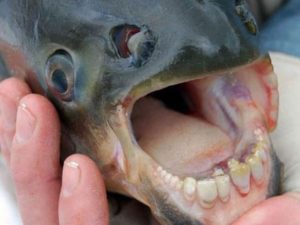 Fisherman Valery from Russia’s Southern Urals was catching fish in a small lake about 40 kilometers far from the city of Chelyabinsk. The man was fishing sitting in his boat.

It was a very quiet morning, and the man was very sleepy. All of a sudden, he saw a fishnet in the bulrushes.

Valery decided to pull the net out of the water. There were several dead fish in it, but one of them, which was quite large in size, was alive. The shape of its body and head was very unusual.

The man tried to get the fish out of the net, but was horrified to see that the fish had a row of white strong teeth in its mouth. The teeth of the fish bore a striking resemblance to those of a human being.

He decided to bring the fish home and show it to his friends. The fisherman placed the weird fish under a thick layer of salt to dry the creature out.

“I hope it will attract scientists’ attention before it finally decomposes,” he said.

Russian ichthyologists believe that the caught fish does not represent a mutation. Such a mutation would take hundreds of years. However, they have no other explanation for this strange phenomenon.