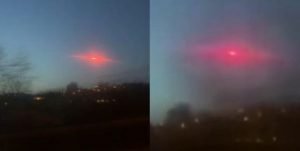 Is it an airplane, a helicopter, a meteor… Or could that be an alien spacecraft over Bradford in the skies?

Juran Harrison, who took this video on Tong Road on Tuesday 26 November at 4.36pm, maintains an open mind-but did not hesitate to call it a “possible UFO sighting”, reports thetelegraphandargus.co.uk.

The video clip, taken from a car, shows a glowing bright red object moving over the roofline across the sky.

Then, as quickly as it appeared, it is gone.

According to Thetelegraphandargus, Juran said: “I would describe it as a burning red light, was moving sideways then down and away leaving a slight trail behind it, then, as quickly as it appeared, it is gone.”

“I saw it appear seemingly out of nowhere and vanish, the object at first looked like a passenger aircraft and appeared similar in size but moved unlike any aircraft I’ve seen before.”