Three young people were out doing what many do, driving to nowhere, when the driver, 25 year-old Geoffrey Maskey decided to park the car on Walton Ave. in Felixstowe, Suffolk (England). The time was 10:30pm on September 20, 1965. In the car with Maskey was Mavis Fordyce and Michael Johnson.

As the friends talked, Johnson, who was in the back seat, opened the rear door and got out of the vehicle. Without saying a word Johnson began walking towards the nearby tree line.

Maskey and Fordyce, curious as to what Johnson was up to, watched as he disappeared behind the trees. A few minutes passed when they noticed what they described as a high-pitched humming sound. At first they could not find a source of the humming, then they looked overhead.

Above was an object about 90 feet off the ground, orange in color and oval-shaped. The two watched the object until it quickly moved and went out of sight behind the tree line, the same area where they had last seen their friend.

Moments later Johnson reappeared from the woods. Something was obviously wrong, as Maskey and Fordyce watched, Johnson stumbled towards the car and collapsed. He was unconscious and could not be revived. Johnson was taken to a nearby medical facility where he regained consciousness and was examined by doctors.

He was found to be in shock, had burns on the back of his neck and had a small wound above his right ear. Johnson remembered nothing and did not recognize his friends. Doctors decided to transfer him to a larger hospital in Ipswich. 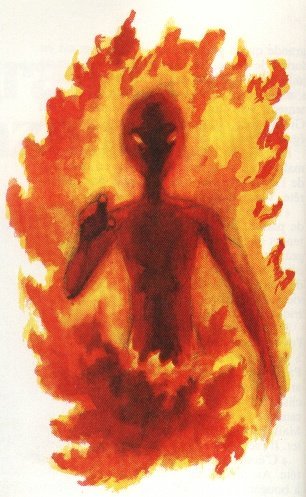 By the next day Johnson was doing much better. He recognized Maskey and Fordyce and remembered at least some of what had happened to him the night before. He said while in the car he felt he was being compelled to go into the woods by some type of force that he could not resist.

Once he was behind the trees he saw a humanoid figure with large slanted eyes. Most amazingly, Johnson said the humanoid was fully engulfed in flames.

That’s the end of the story, Johnson fainted after seeing the burning alien and had no other memory until he was at the hospital.