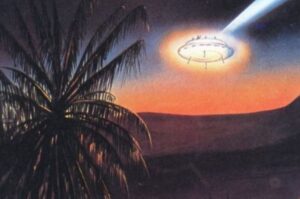 1959 In perhaps the best documented and most celebrated UFO experience of all time, Australian missionary Father William Booth Gill and the entire staff and clients of an Anglican Mission at Boianai, in the former Australian colony of Papua-Niugini (Papua-New Guinea), saw an aerial disc-shaped object and exchanged waves with four passengers on board. The ‘close encounters’ carried over into the next two days.

Papua New Guinea was a hive of UFO sightings over the years of 1958-1959. Over those two years there were over sixty UFO sightings, with most of these being in the Mount Pudi region.

The first sighting of Father William Gill would take place on the 5th April 1959, when he noticed there was a very bright and fast moving light travelling across the Mount Pudi area, which was an inhabited mountain. Thinking not much of it, Father Gill went back to his normal routine.

It was not until about a month later, when his assistant, Stephen Moi, claimed that he had witnessed a saucer shaped object, flying over the skies of the missionary. Being so skeptical, Father Gill still dismissed the incidents and blamed them on atmospheric or electrical phenomena in the sky.

Soon enough though, other events would take place that would make Father Gill question his skepticism and admit that he had borne witness to a UFO sighting. It was on the 26th June that another incident occurred.

It was approximately six forty-five pm, when Father Gill noticed again a bright light in the sky to the north-west of the village. Soon, the word had spread throughout the small community and many others had joined Father Gill and were watching the light in the sky. 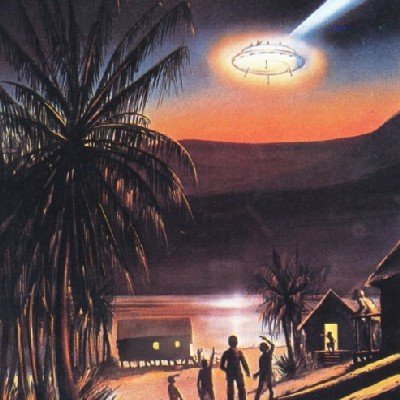 All in all it would be thirty-eight people who could account for what was seen on that occasion.

These would include, Stephen Moi, Ananias Rarata and Mrs. Nessle Moi. Later the witnesses would describe how as the light got a little closer, they could make it out has being roughly the size of five full moons that were lined up against each other. It was in the shape of a disc, with a smaller round superstructure on the top, like the bridge of a boat. Underneath it had four legs that were in pairs and coming down in a diagonal manner.

All of the witnesses that had gathered then continued to watch the craft as it hovered in complete silence. They were all then shocked and amazed as they made out four humanoid shaped figures on the top part of the craft.

They all said that it appeared as if these figures were carrying out work on-board the craft and would move about as if carrying out duties, bending and reaching about inside the craft.

One of them would disappear and then come back into view. There was also a blue light that would shine up from the craft at regular intervals.

This spectacle would go on for about forty-five minutes until about seven-thirty, when it rose higher into the sky, becoming obscured by clouds and then disappearing out of view.

It was then an hour later at eight-thirty that a number of smaller objects returned to the skies over the mission. A further twenty minutes later the larger object from earlier in the night came back over.

This new sequence of events would carry on for a further four hours, then at approximately ten-fifty that night the clouds began to get thicker and they obscured the craft and the smaller ones and they went completely out of sight. That night Father Gill wrote down an account of all that he and the people of the village had witnessed and twenty-five of them signed it.

INTERACTION BETWEEN WITNESSES AND ENTITIES

That evenings sighting was not to be the only one that occurred over the village. The next evening at about six o’clock, a number of smaller craft appeared along with the larger one that had been there the night previously.

As the craft hovered, again silently, about three to four hundred feet away, the beings were again visible in the top part of the craft. It then appeared as if one of the being lent over a sort of rail and looked down toward the people on the ground.

On seeing this, Father Gill waved up to them and to his total amazement, the being waved back. Father Gill would later say that it was like a skipper on a boat waving back to someone who was stood on the wharf.

Ananias then waved to the beings using his two hands and again the beings did the same back to them. This waving between the two then continued for a while. Eric Kodawara then waved a torch towards the craft and as if in acknowledgement back to them, the craft went into a movement like a swinging pendulum.

He then shone the torch to the ground, to see if he could encourage the craft to land on the ground but the craft did not react to this. Throughout the whole encounter, many of the indigenous people of the village would gesture for the craft to land, but they did not get a response.

The children of the village were also said to be excited by the happenings and would cry out at the craft. Father Gill then said that he went inside and had some food and when he returned sometime after, the craft was still there but had rose further away.

The village continued after this with its normal routine and had its evening church service. At seven forty-five when they came out of the building, the craft had gone from view.

At eleven-thirty that night, while most of the community was in the mission, a loud bang was heard on the roof. The group ran outside and saw four of the crafts high up in the sky. The next morning the roof of the mission was checked, but there was no evident damage. 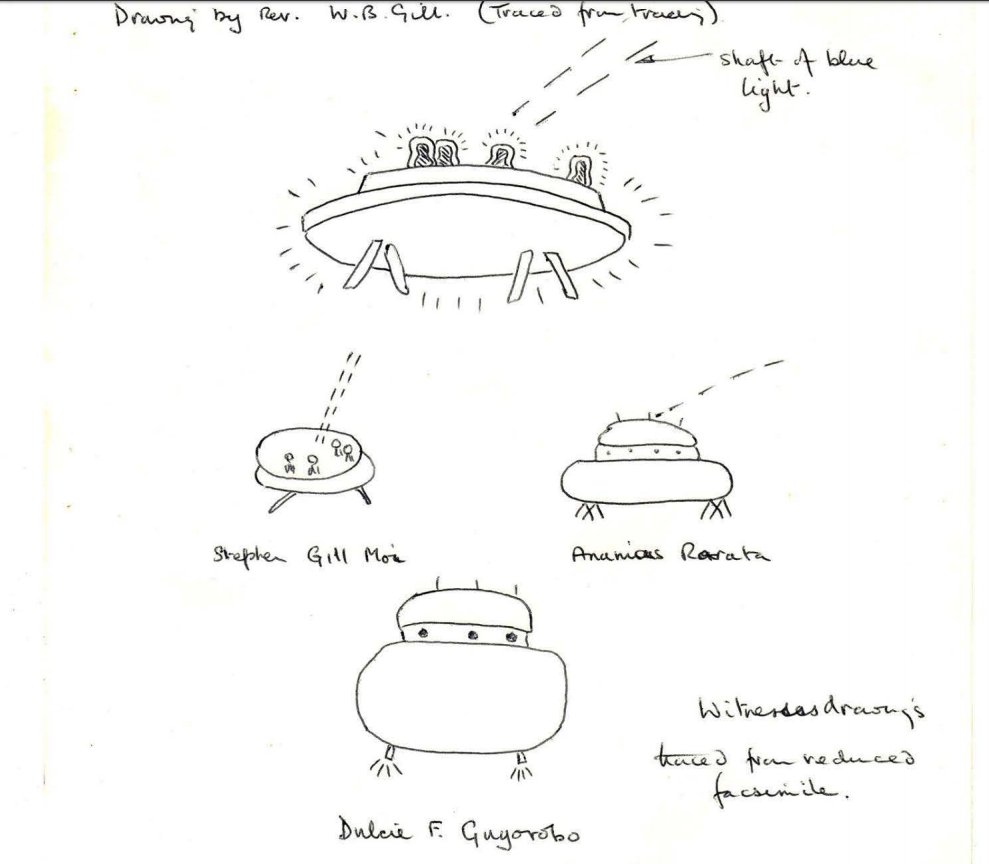 On 24 November 1959 in federal parliament E.D. Cash, a Liberal member from Western Australia, asked the Minister for Air, F.M. Osborne, whether his department (specifically Air Force Intelligence) had investigated the reports.

The minister’s reply did not address this question, but instead focused on the general situation, indicating that most sightings of UFOs were explained and ‘that only a very small percentage, something like 3 percent of reported sightings of flying objects cannot be explained’.

A representative of one UFO group was advised by the Directorate of Air Force Intelligence that the Department was awaiting ‘depth of evidence’ on the New Guinea sightings.

Finally, the Minister for Defense requested a report and the RAAF interviewed Gill on 29 December 1959, some six months after the sighting. Gill’s recollection of the visit is that the two officers from Canberra talked about stars and planets and then left. He heard no more from them.

Not only in the USA: In 1986, Three UFOs Hovered Over a Military Unit in Russia