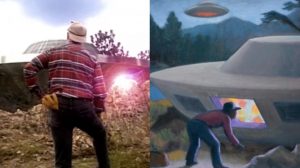 Among the thousands of UFO-related cases that have been reported over the years, the Falcon Lake UFO encounter occupies a unique place in paranormal history.

While a large majority of UFO incidents are reported as strictly aerial sightings, the Falcon Lake encounter is one of a relatively small amount of cases that document actual physical injuries as the result of a UFO-related experience.

The incident was reported to have taken place on May 20th, 1967 at Falcon Lake in southeastern Manitoba, Canada. Stephen Michalak, a mechanic living in Winnipeg, Manitoba, had decided to spend his Victoria Day weekend prospecting for silver at Whiteshell Provincial Park near Falcon Lake.

He was well acquainted with the area, having tried his hand at prospecting several times before in various parts of Whiteshell, but he had recently been told about some promising veins of quartz near Falcon Lake that carried potential silver deposits.

Equipped with a game plan, Michalak traveled to Falcon Lake on May 19th and checked into a motel on the Trans-Canada Highway that evening, eager to begin prospecting the next morning.

At roughly 5:30 a.m. on the 20th, Michalak left the motel and headed into the northern area of the park to begin digging. By 9:00 a.m. he had located a vein of quartz near a small stream, and continued digging until roughly around 12 noon, at which time he took a lunch break. The peace and quiet of his surroundings was soon interrupted by the sound of several cackling geese that were evidently responding to some type of disturbance nearby.

Michalak looked up in the sky and observed two cigar-shaped objects descending slowly into the woods. Both objects appeared to be glowing with a reddish hue, and as they continued to get closer, they took on more of a disc-like shape instead of oval or elongated.

As Michalak continued to observe from a distance, one of the two crafts began to hover in mid-flight, while the other one landed on a massive flat rock roughly 160 feet away from Michalak’s vantage point.

The craft that had been hovering in the air abruptly departed westward, disappearing behind a cover of clouds. Michalak observed that the craft seemed to change in color from red to grey before it faded from view.

As Michalak redirected his attention to the craft that had landed just a small distance away, he noticed that its color had also changed from a glowing red to what appeared to be a greyish color, recounted by Michalak as looking somewhat like “hot stainless steel.”

Michalak had been wearing protective goggles to shield his eyes from rock fragments while digging, and they also proved to be instrumental in protecting his eyes from the intense light that emanated from various openings in the craft.

Michalak estimated the object to be roughly 40 feet in diameter, with a domed top and several apertures through which a brilliant purple light emanated. The craft had no external markings to indicate that it was the property of any particular commercial or military entity.

Michalak also noticed waves of warm air accompanied by a sulfur-like smell coming from the craft. He was able to sketch the object from his position, and after roughly 15 minutes, he noticed that a doorway or portal on the side of the craft had been opened. Taking in as many details of the scene as possible, Michalak anxiously waited to see if anyone would emerge from the craft.

After waiting in vain for about half an hour, Michalak decided to carefully approach the object. Guessing that the craft may be an experimental U.S. military vehicle, he slowly approached the open doorway and heard a couple of humanlike voices speaking in an indistinguishable language.

He attempted to address them in English first, giving a warm greeting, and while the voices inside the craft stopped speaking, they gave no direct response to him. He then cautiously addressed them in Russian, asking “Do you speak Russian?” This was also met with no response.

Michalak then tried some basic greetings in German, French, Ukranian, and Italian, all to no avail. During this time he was able to get a glimpse of some of the interior of the craft through the doorway, and he noticed that the walls were roughly 18 to 20 inches thick, and featured a honeycomb-like construction. 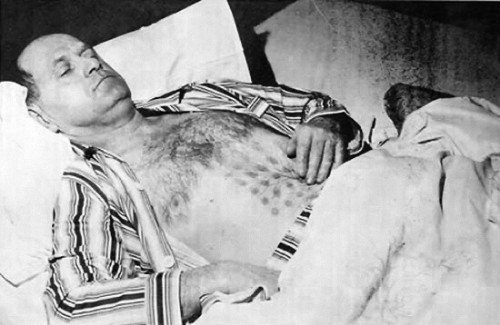 He also noticed what appeared to be some type of control panel, upon which was a maze-like pattern of several different beams of light, arranged in horizontal and diagonal configurations.

After Michalak had attempted the greetings in various languages, the door of the craft abruptly slammed shut, with a type of motion similar to a camera shutter. He then touched the craft with his gloved hand and noticed that it did not feature any type of joints or welding, but seemed rather to have a perfectly smooth, polished and highly reflective surface.

Michalak then noticed that his glove had burned and subsequently melted, although he had barely brushed the craft with his hand. In what seemed like only a split second, the craft suddenly changed position, which put Michalak directly in front of some type of exhaust vent that had a grid-like appearance.

Suddenly, a blast of extremely hot air shot from this vent, setting Michalak’s shirt and undershirt on fire. he frantically removed his shirts, but did not escape having his skin burned by the blast.

The craft then abruptly ascended and took off into the clouds, and Michalak felt a rush of air as it accelerated. He later discovered burn marks on his chest in the exact same grid-like shape of the exhaust vent.

Once the incident had passed, Michalak returned to the spot where he had left his belongings and attempted to gather his senses. The air carried a heavy smell similar to burnt electric wire, along with the sulfur-like smell.

He looked down at his compass and noticed that the needle was spinning erratically, but after a few minutes had passed, it eventually became still again. Michalak started feeling very nauseous, and also began to suffer from a severe headache.

He headed back to the site where the craft had landed and noticed a completely smooth, circular patch of land (no stones or twigs), but on the perimeter of the circle was a pile of accumulated debris such as dirt, leaves and pine needles.

He broke out in a cold sweat and became increasingly nauseous, to the point where he vomited. Michalak decided to gather his things and head back to the motel, vomiting several times more on the way.

Michalak sought help from a constable of the Royal Canadian Mounted Police who happened to be driving by, but was ultimately unsuccessful, as the officer refused to help Michalak after suspecting that he had been intoxicated. After returning to the hotel, Michalak took a bus back to Winnipeg, where his son met him and took him to the hospital.

Michalak was tested for radiation poisoning, but all tests came back well within normal range. Over the next 7 days, Michalak continued to battle nausea and headaches, and lost a total of 22 pounds over the course of the week.

He eventually regained his weight and slowly came back to decent health, but was determined to investigate the site of the encounter to see if he could find out more details about what he had experienced.

Michalak enlisted the help of the Canadian military, who assembled a team of investigators that accompanied him to the site on July 2nd, 1967. The investigators took several samples of the soil around the area, and after laboratory analysis the samples were found to contain high levels of radium, posing a “possible serious health hazard” to the area.

Investigators also found a round-shaped clearing roughly 15 feet in diameter on the surface of the rock where the craft had allegedly landed. Moss and dirt that had formerly covered the rock had been “blasted” to the perimeter of the clearing by what appeared to have been a strong rush of air.

While some of the team’s findings seemed to challenge Michalak’s account–e.g., the surrounding trees and flora showed little to no signs of disturbances or heat damage–there has been an ongoing suspicion that some of the evidence from the site has been obscured or tampered with in order to quell suspicions of paranormal phenomena.

Michalak’s case had even been brought before the Canadian House of Commons in November of 1967, but the cabinet members that raised questions regarding the Falcon Lake incident were basically stonewalled by the Department of National Defence.

In 1999, Michalak passed away at the age of 83. The Falcon Lake UFO incident has been widely accepted as one of the most genuine accounts of a close encounter resulting in physical after-effects.

While the investigations into the details of Michalak’s account have raised skepticism due to their paranormal claims, nothing has been discovered that completely discredits his story either.