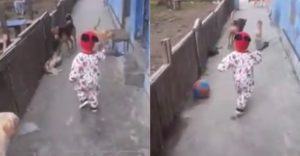 At first glance, everything may seem like ordinary fun. Especially when you consider that the child is just walking along a small path.

At the same time, the man who was filming the video was at some point behind the child. After just a few seconds, a red and blue ball appeared out of nowhere in the frame.

The size of the ball resembled a volleyball or football. Appearing out of nowhere, it rotated against the wall for a while. Due to the low rotation speed, we can say that no one dropped it and it did not fall from anywhere.

At the same time, the appearance of the ball was a real surprise for the child, who immediately turned quickly to see what was happening.

At first glance, it might seem that there are obstacles that would not allow the ball to appear. But if you watch in slow motion several times, then what is happening in the video becomes more difficult to explain.

Therefore, several Internet users pointed out that the ball was probably always in front of the child but since the angle of the shot was behind him, it was practically impossible to see it before.

However, if you carefully rewind and slow the video down, you will notice this new glitch in the matrix. It can be seen that if you look at the child’s legs or dogs legs, you notice that there is nothing between them until he reverses again for the ball that suddenly appeared.

The toddler and his dogs experienced a glitch in the Matrix?