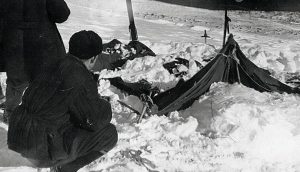 Mikhail Sharavin, who personally participated in the search of Dyatlov’s group, said students could have been killed because of rocket photos. The group of Dyatlov had many cameras and films (about six).

Some devices after detecting the bodies of tourists did not have films, which makes us think. According to Sharavin, tourists could see an unsuccessful test of a military missile and film it.

A missile in the Northern Urals could also cause radiation contamination of people. Triple excess of radiation background prompted to finally deal with students.

Documents classified by the FSB can help to finally understand the matter. An avalanche is definitely excluded, since damage to bodies is not randomly scattered. To get to the truth it is necessary to exhume the bodies.

Students died in February 1959 near Mount Holatchahl in the north of the Sverdlovsk region. To this day, no one knows the exact cause of death.