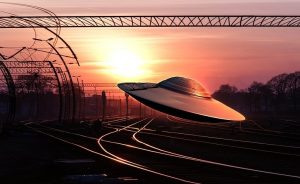 Myth: UFOs are only reported by uneducated farmers in places you’ve never heard of…
Fact: A study by the U.S. Air Force showed that the most puzzling UFO reports came from people who had the best technical backgrounds. They are reported from everyplace where there are people, though fewer are seen from big cities because less of the sky is visible.
UFOs are reported by every type of person: uneducated yokels and PhDs; laborers and corporation presidents; truck drivers and airline captains; little kids, their parents and their grandparents. People in every state, every province and every country. They are reported by people who are convinced every light in the sky is an alien craft, and by other people who are convinced that no one as smart as them ever sees odd things in the sky.

People in rural areas may see more UFOs because they can see more of the sky and because they may look at the sky more often. Big city people have a poor view of the sky, and they are usually too busy to look up. Generally speaking, UFOs are seen by people who happen to be in the right place at the right time. Source: Don Berliner, The Fund for UFO Research, Inc.

Myth: Airline pilots never see UFOs, so they must not be real…
Fact: There have been many cases of pilot sightings ever since the 1940s and they continue through today.
Some of the most convincing UFO reports were produced in the 1940s, 1950s and 1960s by airline pilots, military pilots and ex-military pilots but even today there are startling sightings by pilots. These men had the training and the experience to be able to distinguish between normal sky sights and highly abnormal sights. They knew what airplanes looked like, and what meteors looked like, having seen them many times. Their visual observations were frequently supported by radar data which showed essentially the same thing. They were therefore able, on many occasions, to methodically eliminate conventional phenomena from consideration when trying to identify UFOs.

In those same decades, most UFO sightings were made in the daytime and frequently at close range, when shapes and surface features could be distinguished, thus making positive identification of normal sights easier and the descriptions of unusual sights more detailed. When all normal explanations had been eliminated, the witnesses could concentrate on those aspects of the experience which were most abnormal.

These abnormal aspects included the shapes of UFOs and their behavior. Most of the UFOs seen in the daytime were said to have had simple geometric shapes–discs, ovals, spheres, cylinders–and surfaces that looked like metal. Such shapes are not only nonexistent among known aircraft, but contrary to all known theories of flight, in most cases offering control and performance disadvantages rather than advantages.

Myth: Very few people have really seen a UFO…
Fact: According to a Roper poll conducted for the SciFi channel, one in seven Americans say they or someone they know has had an experience involving a UFO…
A total of 14 percent have had or know someone who has had at least one Close Encounter of the “First,” “Second,” or “Third” kind. The largest proportion (12 percent) say they or someone else they know has seen a UFO at close quarters.Source: Poll from – Coalition for Freedom of Information

Myth: The U. S. Air Force investigated UFOs and concluded there was nothing to them…
Fact: The Air Force had an official UFO investigation from 1948 to 1969 (Projects Sign, Grudge and Blue Book), and collected more than 12,500 reports. It claims to have explained all but about 701 of them, but the facts of most of those reports strongly suggest that something important was seen.

The U.S. Air Force claims to have explained all but 701 of its reports, though by actual count the number is 584. But as so many of these were made by military and airline pilots, and other unexplained sightings involved radar tracking, they are the heart of the matter. Hundreds of other reports in the official files are alleged to have been explained, but are full of unscientific and illogical reasoning.

If so many cases are admittedly unexplained, they cannot be used to support any conclusions, as the nature and origins of unexplained cases are, by definition, unknown. If you add those cases that are only “possibly” explained, the total lacking convincing explanations tops 50%, which strongly suggests that the official investigation was a failure.

Myth: UFOs have only been seen since 1947…
Fact: There are UFO reports in newspapers and literature dating back to 1865 and even earlier in cave drawings, and other early mediums.

Myth: UFOs are only seen by Americans…
Fact: UFOs have been seen wherever there are people. Every continent has had its share, as has almost every country, though local interest plays a role in the apparent level of activity. Wherever there is someone interested in searching out UFO reports, they will be found, but that doesn’t mean the investigator lives in a center of activity.

Some of the first UFOs were seen in Europe and the Pacific. Since then, they have been reported from all continents and probably all countries. There have been major waves of sightings not only in the USA, but in Great Britain, France, Belgium, Russia and elsewhere. Official and private organizations have been established in many countries to study their sightings, and their results are similar to other countries’. The same kinds and variety of UFOs are seen most places, and this has changed little over the years.

In late 1944, following a gradual build-up of activity, “foo-fighters” were reported in large numbers. Pilots of American and British bombers and night fighters over occupied France and over Germany described glowing balls that flew in formation with them for long periods and then just flew away. The first “explanation” was that they must be experimental German anti-aircraft weapons that were being tested prior to being put into action. But the war ended without a single “foo-fighter” showing unfriendliness. Explainers then tried to blame German jet and rocket fighters in night operations. But it was later determined that there may have been only a single night flight by any German jet, and none by their rocket-powered fighters.

At about the same time in the Pacific Theater of War, American bombers were followed for hours by bright lights that eventually turned away. Military officials said they were Japanese suicide planes, and that is how they show up in official mission reports. But suicide planes never flew at night, and they never followed our bombers for long periods of time without doing anything. The war ended with hundreds of reports still unexplained.

Former CIA Pilot John Lear: There are Millions of Aliens Living on the Moon