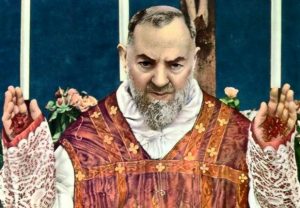 The controversial public display of Padre Pio’s body is attracting a new kind of Irish holidaymaker who likes to combine sunshine and spirituality.

Thousands of these ‘tourist pilgrims’ are travelling to view the mystic monk’s remains in San Giovanni Rotondo, before heading off for some secular sight-seeing around the rest of Italy.

But the stigmatic saint, whose body has been exhumed 40 years after his death, is the main draw in these religious vacations to the Puglia region.

Tour operators are tapping-into this growing market for trips with a sacred flavour. Around 750,000 pilgrims from all over the world have already booked to visit Padre Pio’s crypt.

Irishwoman Una Rosso was one of the first to see the saint this week.

“He was dressed in his Capuchin robes, with brown socks and sandals, and mitts on his hands. He had a big frothy beard, which really pleased me. He looked quite small,” she said.

“He was in a coffin made of bullet-proof glass, and surrounded by hundreds of beautiful red and yellow roses.”

Donegal woman Nuala Slevin has been taking these pilgrim packages to Italy for 18 years in a row. She enjoys Italy’s famous food, culture and weather but says her devotion to Padre Pio is what really draws her back year after year. Next month’s trip, with 51 fellow pilgrims — many of whom are by now old friends — will be particularly emotional. “It’ll be different this year because we’ll have the privilege of praying at his body. It’ll be very nice to put a face on this man we’ve been praying to over the years.

“I know when I see him laid out in his casket I’ll feel even closer to him than I do now. It’ll be nice to see him in the flesh, to have a person-to-person relationship, and to talk to him,” she said.

If Italy is shaped like a boot, San Giovanni Rotondo nestles somewhere around its ankle. The hill-top town rises up out of the fertile Puglia countryside. Among the rows of olive trees, electricity producing windmills seem to turn lazily in the heat. Black-clad widows watch the many tourist coaches wind their way through the narrow streets.

Ageing monks shuffle between the Santa Maria delle Grazie church, which contains Pio’s tomb, and the larger modern church designed by the famous architect Renzo Piano. With their bushy beards and brown hooded robes, the friars look like Padre Pio himself. One monk is busily blessing family cars with holy water in the piazza. When Padre Pio arrived here in 1916, there was little more than a humble monastery.

But since his death in 1968, an industry has been steadily growing up around him.

The streets are lined with shops selling kitschy trinkets: Padre Pio’s image features on everything from cigarette lighters to babies’ bibs. Devotees can buy Padre Pio perfume, a scent similar to the smell of roses the saint was said to have emitted, and brown fingerless gloves, just like the ones he wore to cover his bleeding stigmata wounds. Pio’s name is on everything from hotels to a bungalow building firm.

Before Padre Pio was canonised in 2002, to popular acclaim, an Italian bishop complained about the over-commercialisation of San Giovanni Rotondo. “Jesus Christ chased out the merchants from the temple, but I see now that they have returned,” he said.

Another dominant feature is the enormous hospital established by Padre Pio, the Home for the Relief of Suffering.

“If you get sick in San Giovanni and you’re over here from Ireland, it’s a very good place to have to go into. No-one wants to go into hospital but, if you need it, it’s there,” said Robert Hacker, a volunteer in the office for English-speaking visitors.

He said Irish pilgrims have told him that Padre Pio is now the “number one” saint in Ireland, edging Patrick into second place. 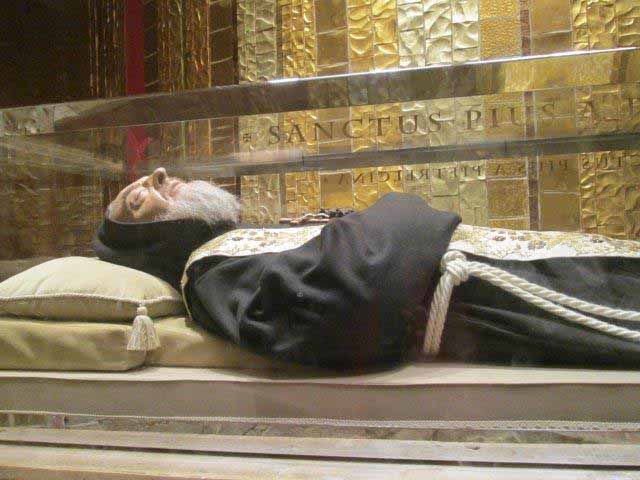 “If you look at him he seems very accessible, he doesn’t seem a distant type of saint, he just seems like someone that everyone feels comfortable with. He’s from a farming family and he understands people’s problems and I think people realise that about him. He wasn’t a severe type of a fellow,” he said.

Hacker said the exhumation and public display of Padre Pio’s body will finally stop the confusing rumours about the condition of his body.

“There were rumours coming out of Ireland about Padre Pio’s body, that the friars had secretly opened the tomb years ago and found it empty. That Padre Pio had been assumed into heaven body and soul, and the friars only found his sandals and his robes neatly founded in the tomb! That wasn’t true of course.”

Hacker also moved to scotch another false claim about Padre Pio. He said if you are given a chain-letter recipe for baking Padre Pio bread, you should ignore the request. “It’s phoney,” he confirmed.

He said pilgrims should not be disappointed that Padre Pio’s body was not in perfect condition when it was exhumed last month. Skilled morticians worked round the clock to reconstruct the partially decomposed corpse and render him recognisable. Thanks to a silicone mask, designed by a London waxworks company, the faithful can now see the familiar face with grey beard and dark eyebrows.

“Think about Saint Francis, how great of a saint was he? He only had bones. So I don’t see that it’s that big of a deal,” said Hacker.

“Many years ago the Buffalo Bill Wild West show that used to be popular in America around 100 years ago. They had an incorrupt body of an outlaw that they used to carry around in the show and put on display. Now was he a saint because he was incorrupt? I don’t think so.” Now San Giovanni Rotondo is bracing itself for an influx of pilgrims. In a normal year, some seven million pass through. Three-quarters of a million have booked to file through the burial chamber between now and October, but countless others will turn up.

But not everyone was happy with the decision to exhume the saint. The Turin office of the lawyer Francesco Traversi is piled high with documents relating to the monk. A Padre Pio devotee, he is delighted at the level of interest in Ireland, saying “we Italians are in love with the Irish”.

Despite his youthful appearance, Traversi claims to have met Padre Pio in 1958 when he was just seven years old. He says the monk caressed his cheek and blessed him with a “radiant smile”.

But Traversi’s mood changes when he discusses the current situation in San Giovanni Rotondo. He tried to stop the exhumation with a legal action, and he speaks angrily about the Archbishop who oversaw the procedure.

Traversi maintains Padre Pio’s final resting place has been violated in what amounts to an act of sacrilege. “Padre Pio wanted to rest. He wanted that his remains rest in a quiet corner. He wouldn’t have liked the idea that his remains one day would be used like they were a toy or a plaything.”

However, Traversi insists he doesn’t direct his anger at the Catholic Church.”Look, I’m angry with certain men of the Church who have mis-used their functions and their titles in the Church. We maintain that these men have accomplished an act of sacrilege.

“Padre Pio should not have been touched. Padre Pio has to be left to rest in peace, as was his wish.” But the modern-day pilgrims, queuing to photograph Pio’s crystal casket with their mobile phones, will not be persuaded as they continue to flock to be close to the man they consider a miracle-worker.