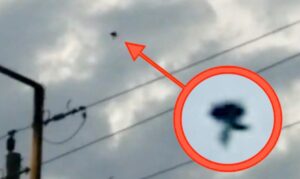 This strange object was slowly moving across the sky when an eyewitness noticed it.

He reached for his cell phone and took nearly a minute of raw footage for us. A UFO was spotted in Ontario, Canada on May 20.

The mysterious object moved silently, and as it approached the operator it did not become clearer what it was.

The UFO is dark with no obvious top or bottom. No wings, no propellers. However, it flies low and is estimated to be about a meter in size. Oddly enough, it looks like it follows the power lines.

More interestingly, as soon as the object approached, the electricity suddenly went out. It can be seen in the light of a street lamp.

“I can see no earthly explanation for this craft other than it is not of this world.”, said ufologist Scott C. Waring.

What it was remains a mystery.