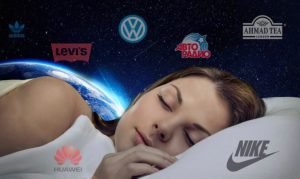 We come across advertising all the time. The continuous stream of information from radio and television, the Internet and print media is saturated with advertising.

Even when we go outside, we see advertising banners and announcements in front of us. A person can hide from advertising only, for example, in a dream. But soon people will not have even such an opportunity.

It is reliably known about the development of technology that will allow the introduction of advertising into the consciousness of a person while he is in a state of sleep. This data was released by a group of experts who studied sleep problems in three major research centers.

The technology is called “dreamtech”, and its development is funded by large companies that make money from marketing.

At the first stage, research was carried out, but now there is a high probability that the technology is in a state that brings it closer to practical implementation. This is confirmed by two of the three experts – they have worked to create devices that can embed ads in dreams.

The concern is also caused by the activity of the American company Molson Coors. The brand invited sports fans to become participants in an experiment with just such a topic. They would receive free beer as a participation fee.

These and other circumstances forced the scientists to unite and write an open letter. This message is a warning to all progressive humanity. The authors condemn the attempts of marketers to encroach on such matter as sleep. New technologies that exploit the ability to motivate people to act by interfering with dreams can lead to great disaster, and people will be completely unprotected.

The document was signed by 40 other prominent scientists, which indicates its importance. The authors of the message are demanding intervention in this process by the US Trade Commission, which, in their opinion, should reconsider acceptable marketing approaches.

The letter directly indicates that now it is still possible to influence the situation and correct it. At the same time, they are confident in the importance of research in this area not only for science, but also for practical purposes.

The main emphasis should be on the use of technologies for influencing sleep in medicine. At the same time, a situation is created when the development of this technology gets out of control. For example, wearable electronics companies may not resist the temptation to sell collected information about users’ dreams to the outside, or begin to interfere with them for commercial gain.