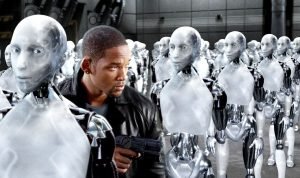 Artificial intelligence, once considered a fiction of science fiction writers, is gradually becoming a part of our lives. Modern technologies have learned how to accurately make medical diagnoses, recognize faces, control drones and cars.

Historian and philosopher Emil Torres warns that artificial intelligence is fraught with great danger and can even destroy all of humanity. So what is AI – our faithful assistant or a terrible threat?

On the way to the industrial revolution

Zou Qiyong, Managing Director of the UN Industrial Development Organization, said that high technology is very important for humanity. He said that AI is improving manufacturing efficiency, especially when working remotely, and is bringing the world closer to the fourth industrial revolution.

“AI technologies can increase efficiency and flexibility in the manufacturing sector, especially in situations where supply chains are broken and work is happening remotely,” he said, speaking at the World Conference on Artificial Intelligence in Shanghai.

Qiyong added that modern technology will have a significant impact on global industry, economy, society and culture.

How machines became smarter than people

Philosopher and historian Emil Torres is convinced that computers will soon become much smarter than people. Many systems have already reached superhuman abilities – bots with devastating scores defeat titled chess players and experienced poker players. According to the historian, artificial intelligence is not going to stop developing.

“New advances in IT will allow the creation of ever more advanced AI technologies: algorithms that can solve complex problems in several areas at once. Imagine one program that can not only easily beat a grandmaster in chess, but also write novels, compose music and lead car down a busy street,” the columnist wrote in The Washington Post.

The historian believes that artificial intelligence will completely surpass human intelligence by 2075. And this, of course, gives rise to serious concerns. Torres believes that AI can declare war on humans and wipe them off the face of the earth.

“If artificial intelligence destroys us, it will happen by accident. The cognitive processes of AI are very different from ours. They are perhaps the most unpredictable thing in our future,” he said.

People cannot predict the actions of AI even during the game, so what can we say about more global tasks? Torres is convinced that if humanity gives the computer too much power, it will perish.

“What if an AI programmed to bring peace to the earth hacks government systems and launches nuclear weapons? After all, if people disappear from the face of the earth, then there will be no war. Yes, we can set the computer so that it does not do this. But AI can have his own plan B,” Torres said.

Influential scientists and businessmen also speak about the threat posed by artificial intelligence. Famed physicist Stephen Hawking has repeatedly warned that advanced AI will be able to constantly improve itself. And the speed of its evolution will be incomparable with the speed of human development. People run the risk of being at a lower stage of development.

A similar opinion is shared by the American billionaire Elon Musk. The businessman believes that people need to be extremely careful with technology, because “they are potentially more dangerous than nuclear weapons.”

“Increasingly scientists think there should be some regulatory oversight maybe at the national and international level, just to make sure that we don’t do something very foolish. With artificial intelligence we are summoning the demon. In all those stories where there’s the guy with the pentagram and the holy water, it’s like yeah he’s sure he can control the demon. Didn’t work out.”

“With artificial intelligence, we summon a demon. In all the stories about the guy with the pentagram and holy water, this guy is sure that he can control the demon. It didn’t work out,” Musk said, speaking at the Massachusetts Institute of Technology.

“We are not ready for the era of super technologies”

Of course, now the theories about the rise of the machines seem like something from the realm of fantasy. However, the scenario in which artificial intelligence ends up in the hands of dangerous scammers or terrorists is quite real.

Experts sound the alarm: in the wrong hands, modern technology can become a terrible weapon. Already, hackers have learned to create fake videos featuring influential politicians and celebrities that are almost indistinguishable from the real ones. And with the help of a drone equipped with facial recognition software, attackers track down their victims and can even kill them.

According to Torres, humanity is not yet ready for the era of superintelligent machines. The understanding of technology is just beginning to emerge, and the situation in the world is extremely unstable. This, for example, proves Russia’s attack on Ukraine.

Implementing artificial intelligence in all spheres of life now is like “lighting a match next to a fireworks factory,” the author believes.

Is Time Travel Possible? Current Ideas On Travel To the Future and Past