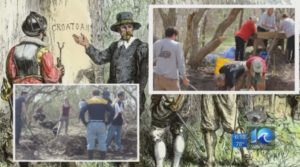 In the United States, a team at the First Colony Foundation has announced a find that could make a sensation. Archaeologists have discovered a 16th-century settler camp that may explain the mystery of the Roanoke Colony’s disappearance without a trace.

The Roanoke Colony refers to two attempts by Sir Walter Raleigh to found the first permanent English settlement in North America. The English, led by Humphrey Gilbert, had claimed St. John’s, Newfoundland, in 1583 as the first North American English colony by royal prerogative of Queen Elizabeth I. Roanoke was second.

The first Roanoke colony was established by governor Ralph Lane in 1585 on Roanoke Island in what is now Dare County, North Carolina, United States. Following the failure of the 1585 settlement, a second colony led by John White landed on the same island in 1587, and became known as the Lost Colony due to the unexplained disappearance of its population.

The discovery was made on a cliff above the Albemarle Sound, located about 70 km west of Roanoke Island. There, a team of researchers discovered a variety of English, German, French and Spanish pottery, reports National Geographic magazine.

The researchers themselves believe that their find provides “compelling evidence” to help unravel one of America’s oldest historical mysteries.

It was the first English colony in North America to include women. In August 1587, 115 people crossed the Atlantic and settled on Roanoke Island. Then a half dozen settlers went to England for supplies, and when they returned three years later, they found the colony empty and abandoned.

According to one version, the settlers were exterminated by the Indians. Another popular version says that the starving colonists split into two groups and went in different directions. The latter theory is supported by a new study. Archaeologists believe that the fragments of dishes they found belonged precisely to the settlers of the Roanoke colony.

Interestingly, just a few months ago, another research group also claimed to have found traces of a lost colony. Items allegedly associated with the mysteriously missing settlers were found on Hatteras Island, located about 70 km south of Roanoke Island.

If both discoveries are confirmed after detailed laboratory studies of the artifacts, they will actually prove the theory that the colonists split into two or more groups. This will also be proved by the version that the missing settlers not only managed to survive, but also received help from the indigenous people, with whom they probably gradually assimilated.