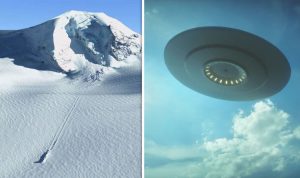 The southernmost uninhabited continent of the planet is an ideal place to create various bases. From time to time there are abandoned objects from the Second World War.

However, as it turned out, it is not all buildings. Former US military says aliens regularly visit Antarctica.

The former army officer, who is said to have served for 20 years, allegedly told an amazing story to investigative journalist Linda Moulton Howe.

Linda asked Brian, 59, an ex-employee of the 6th Antarctic Development Squadron, about his personal observations from 1983-1997. The man said that in the past he saw a huge UFO and a giant entrance hole to an alien base.

During his service, Brian could fly over an area through which flights for pilots from other countries were prohibited. During one “trip”, a man saw a spaceship of aliens enter a large hole. Such observations were repeated several times.

UFOs also appeared over the mountains, but then still headed towards their hole, which is located about 15 km from the south pole in the non-flying zone.

Brian saw only one base in his life, but there may be many more. According to the former army officer, the authorities of advanced countries are aware of everything. Moreover, they even collaborate with aliens.

Ex-US Naval officer remembers when twelve researchers vanished for two weeks at a camp close Marie Byrd Land and when they reappeared, Brian’s flight crew had the task to pick them up. Brian says they wouldn’t speak and “their faces looked scared.”