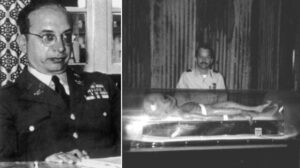 Philip James Corso was an American Army officer. He served in the United States Army from February 23, 1942, to March 1, 1963, and earned the rank of lieutenant colonel.

Corso published The Day After Roswell in 1997, about his alleged involvement in the research of extraterrestrial technology recovered from the 1947 Roswell Incident.

On July 23, 1997, he was a guest on the popular late night radio show, Coast to Coast AM with Art Bell where he spoke live about his Roswell story. Corso died of a heart attack less than a year later.

He says that he actually saw the body of a dead alien recovered from the Roswell wreckage of 1947. For more than 50 years now, the world has been captivated by the Roswell incident, and Colonel Philip Corso, retired American Army officer, now deceased, has left us details of what he saw in 1947 at Fort Riley in Kansas.

He is the highest ranking officer to come forward with details about the famous New Mexico crash.

He claimed that the New Mexico wreckage was definitely not from a balloon, but from an alien spacecraft. Although the Roswell case often takes an occasional hit from witnesses whose claims are debunked, or from the fakery of the infamous Santilli Alien Autopsy Film, it always comes back to the forefront of Ufology.

Corso’s claims became public knowledge in his book, “The Day After Roswell.”

Not only did Corso claim to have seen an alien body from Roswell, but also secret Pentagon files regarding the incident. He stated that the Pentagon had the bodies of aliens shipped to the Walter Reed Hospital in Washington, D. C. Autopsies were done on the dead aliens. He also tells us that America’s best was stumped by the extraordinary technological marvels in the alien craft.

Different parts of the Roswell craft were sent to various defense companies, who reverse engineered their properties. This engineering feat eventually led to a number of breakthroughs. Among them were integrated circuitry, night vision equipment, the laser, particle beams, and fiber optics. The contractors were told that the parts were stolen from Russia. 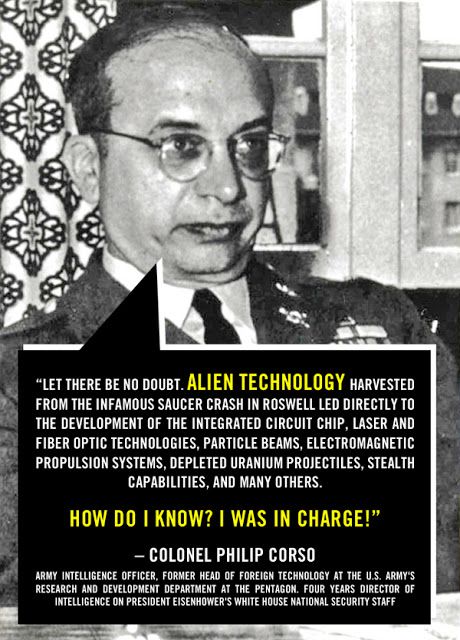 He also claims that the government cover-up was not only to hide the truth of extraterrestrial intelligence from the public, but also to allow the time needed for the reverse engineering process to be protected from foreign countries, especially the Russians.

In his book, Corso stated; “Nobody wanted to come in second place in the silent, unacknowledged alien-technology development race going on at the Pentagon as each service quietly pursued its version of a secret Roswell weapon.”

Corso’s first breakthrough into the vast “above top secret” box of goodies came when he was stationed at Fort Riley in Kansas in July of 1947. He had become curious about a cache of sealed boxes which were being stored in a high security area of the base. Not being able to hold back his desire to look into the secrets inside, he took a torch and pried open one of the boxes. He was shocked at what he was looking at.

“The contents, enclosed in a thick glass container, were submerged in a thick light blue liquid. At first I thought it was a dead child they were shipping somewhere, but this was no child.

“It was a 4ft human-shaped figure with arms, bizarre-looking four-fingered hands — I didn’t see a thumb — thin legs and feet, and an over-sized incandescent light bulb-shaped head that looked like it was floating over a balloon gondola for a chin.”

“I had the urge to touch the pale grey skin. But I couldn’t tell whether it was skin because it also looked like a very thin one-piece head-to-toe fabric covering the creature’s flesh.”

Corso’s description of the body is very much the same as other Roswell witnesses have described the aliens.

Although some investigators reject Corso’s claims, there can be no doubt about his credentials.

After joining the Army in 1942, he served in Army Intelligence in Europe.

During the Korean War, he continued his Intelligence duties under General Douglas MacArthur.

He rounded out an impressive resume with four years on President Dwight Eisenhower’s national security staff.

The main criticism about his book is that there is a lack of references to documents, which, in my opinion does not necessarily make his claims false. With the reputation that Corso had, and his clearances, it seems highly likely to me that he would have been in a position to see what he saw.

I, Col. Philip J. Corso, (Ret.) do hereby swear under the penalties of perjury that the following statements are true:

– That at all times hereinafter mentioned, I was a member and officer of the defendant.

– That during my tenure with the defendant I was a member of President Eisenhower’s National Security Council and former head of the Foreign Technology Desk at defendant’s Research & Development department.

– That on or about July 6, 1947 while stationed at Fort Riley, Kansas, I personally observed a 4-foot non-human creature with bizarre-looking 4-fingered hands, thin legs and feet, and an oversized incandescent light bulb-shaped head. The eye sockets were oversized and almond shaped and pointed down to its tiny nose. The creature’s skull was overgrown to the point where all its facial features were arranged frontally, occupying only a small circle on the lower part of the head.

– There were no eyebrows or any indications of facial hair. The creature had only a tiny flat slit for a mouth and it was completely closed, resembling more of a crease or indentation between the nose and the bottom of the chinless skull than a fully functioning orifice.

– That in 1961, I came into possession of what I refer to as the “Roswell File”. This file contained field reports, medical autopsy reports, and technological debris from the crash an extraterrestrial vehicle in Roswell, New Mexico in 1947.

– That I have personally read the medical autopsy reports which refer to the autopsy of the previously described creature that I saw in 1947 at Fort Riley, Kansas.

– That said autopsy reports indicated the autopsy was performed at Walter Reed Hospital which was under the authority of the defendant at the time of the autopsy.

– That said autopsy report referred to the creature as an “Extraterrestrial Biological Entity”.

Attorney Peter A. Gersten, executive director of Citizens Against UFO Secrecy, Inc. (CAUS), a non-profit Arizona activist organization dedicated to ending all secrecy surrounding this planet’s contact with an extraterrestrial intelligence, announced today that retired Army Colonel Philip J. Corso has sworn under oath to statements previously made in his best-selling book ‘Day After Roswell.’

Gersten stated that Colonel Corso has provided CAUS, for use in its lawsuit against the Department of Army, with a sworn affidavit re-affirming previous statements that he saw alien bodies in July, 1947 and had the opportunity to read their autopsy reports in 1961.

The CAUS lawsuit, which was filed March 25, 1998 in the U.S. District Court in Phoenix, is asking the federal court to direct the Army to provide Gersten and CAUS with any and all documents relevant to what the Colonel, now swears under oath, he saw and read.