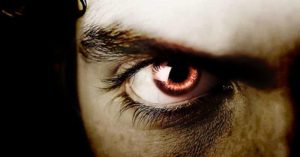 The translation of Mal Occhio from Italian to English is: mal means bad and occhio, eye. The term, Evil Eye is more widely known and often misunderstood. It is a curse but one that can be removed by anyone with knowledge of the ritual to be performed

In Rome the “evil eye” was so well recognized that Pliny states that special laws were enacted against injury to crops by incantation, excantation or fascination.

Golden amulets/charms such as an open scissors, a hand, the Corno, which means Horn, are placed on newborn babies’ diapers. This is done to ward off the Mal Occhio more commonly known in English as, The Eyes.

Gold and silver twisted horns of all sizes are worn around the neck to ward off mal occhio by Italians and Italian Americans. Large red horns can be seen suspended from car mirrors. Red is a lucky color.

Throughout the old world, fear and belief in the Evil Eye still exists today. Different cultures wear their own type of protection. Another easily recognizable is the Greek Eye. It is also worn around the neck. It is blue with a black dot inside, encircled with gold or silver trim. The Greek words for Evil Eye are, Baskania or Matiasma.

Mal Occhio can arise without a person having any special powers such as the “overlook” which is a curse/evil eye. The Eyes are caused more times without the offenders’ knowledge. This is one of the reasons that babies and young children are often spit upon three times by their parents, grandparents, aunts, uncles, etc.

Fortunately most recipients do not actually get sprayed with spittle. It is more or less a, too- too sound. Nonetheless, it wards off the effects of the Evil Eye and is coupled with the term, God Bless Him/Her.

This is a headache that does not seem to quit. Aspirin, Tylenol, or any other brand name pain relief will not ever work on The Eyes.

“Sleeping on The Eyes,” is a term used by those who perform the prayers to dispel them. It means exactly what it implies. Going to sleep with a whopper of a headache serves to make the headache even worse upon awakening. The eyes tear accompanied by exhaustion and a general feeling of malaise with some depression or anxiety.

When someone has a severe affliction the person who can remove The Eyes will actually become nauseous. There are instances when the prayers must be recited several times.

This is not propitious. Women have had miscarriages, accidents or whatever else the person inflicting the Fatture (curse) projects.

Fortunately, even a deliberate infliction of Mal Occhio can be removed. However, it is much more difficult for the party who is performing the removal of Fatture. Animals, crops, automobiles, homes, etc. are not exempt from The Eyes.

Various methods can be utilized for persons who do not wish to wear the Corno/Horn as a charm/amulet.

At home, it is never a bad idea to place an open scissor between the bed mattress and box spring.

This wards off evil while the physical body sleeps. It also is a protective measure for Astral Travel (OTBs). See, “Mastering Astral Travel,” for a more complete description of the subject.

Wearing something red is also helpful. It does not need to be seen and can be as simple as undergarments or a handkerchief.

The strung garlic sold in artificial plastic form is more than a decoration. Garlic is another instrument of warding off evil. The Garlic strand is hung outside the entrance of the home, the office, the shop, etc.

Hot red peppers are also displayed at the outside entrance of the home, etc. They too can be plastic or fresh.

When a compliment is paid, always make the right hand into a fist, insert the thumb between the forefinger and middle finger. Leave it intact until the person is finished giving the compliment.

Something as small as: I like your blouse warrants the thumb maneuver. Always bear in mind that the person does not have a conscious intent of causing harm. They may feel a bit envious. Such as, they like the blouse and would like to have one or thinking it would look better on them.

Even something as innocent as telling another their fingernails look great will prompt a forewarned Italian to move their hands out of view.

A great deal of Italians complimenting another will say something like: what a beautiful baby, God Bless him/her. This is a gesture for not projecting envy even when there was no such intent. The wise person knows that the element of envy exists within every conscious entity. Something as innocent as a compliment can give rise to the person feeling or thinking they wish they could have such a beautiful baby.

How a Person Knows They Have the Eyes

Most Italians are familiar with the phrase, “make the eyes on me please.” The request is made to one who can remove them. It usually arises when someone has a bad headache. Heavy eyelids can also be a clue. The aggrieved individual usually is unaware that they have The Eyes for certain.

There is a signal of knowing. Only the person who performs, removing The Eyes, recognizes and feels that symbol.

Mid-way during the ritual they begin to yawn. In the alternative, they yawn after they finish saying the prayers. If they do not yawn, then there is no Mal Occhio. It is just an ordinary headache.

After The Eyes are made, the victim is instructed to place some salt in a bowl of cool water and with eyes tightly shut, rinse the face three times. The remaining salted water must be flushed down the toilet bowl.

There are no book instructions for learning how to do them. Written records are scanty and disallowed since the secret is passed on face to face for a reason.

The Italian custom is that The Eyes can only be taught to another on Christmas Eve exactly at midnight. There is no ritual involved or special clothing just a conveyance of the prayers and the correct way to say them.

Many practitioners use olive oil along with the prayers. Others just recite the prayers and make the symbolic motions which are always done on the recipient’s forehead.

There is no withholding here as to what the symbolic motions are, the only reason being, that divulging it would violate the Christmas Eve rule. It must be kept secret until that moment.

Oddly, distance does not play a role. The forehead symbols are mentally performed with a gesture of the hand. They can be done over the telephone as well. No photo is needed or mental image of the person or contact.

Believing in Mal Occhio Is Not Required

Remarkably, a person does not have to believe in The Eyes. Many Italian Americans spoof at the idea of such an ancient remedy for a headache. They simply do not believe in them. A great deal of non-Italians share the same belief.

Someone can request that The Eyes are done for someone else who has a bad headache. They are then done without the knowledge of the afflicted person. Surprisingly, it works!

The most rewarding part of doing them for a non-believer is to have them suddenly announce a few minutes after they are done: my headache is gone.

Fattore Is Not a Fairytale

Although the rituals involved with removal of The Eyes and the ways in which they are inflicted sound as if they are innocuous and medieval, do not take the Fattore (curse) lightly. Thousands of years have never dispelled or disproved Mal Occhio. The proof lies in the fact that it is still widely practiced and believed in the old and the new world in the current time.

Something as simple as Friday the 13th sends shivers up the spines of most people. For a witch, however, it is a lucky day.

For those who do not believe, reflect back to the times when someone paid a great compliment such as: you really look good today, that dress/suit makes you stand out.

A short time later, a glass of wine, coffee, soda, somehow spills all over that beautiful dress or suit. It’s cheaper to make a fist and place the thumb between the fore and middle fingers during the compliment.

5 Ways to Protect Yourself from Black Magic