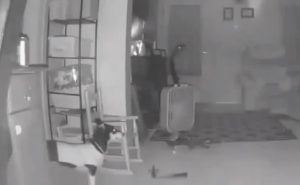 A strange video was published recently on the Reddit website. According to the author, this was shot on a surveillance camera installed in the living room of their house.

A family dog stands in the left corner and listens to something very wary. Suddenly, as if something from behind were grabbing her hind legs and dragging her out the door.

According to the author of the video, her dog didn’t move so fast, especially in a turn, and on the whole the footage looks very strange. Behind, where the dog was dragged, there is a door to the bathroom.

“If it’s not fake video, then it looks very intimidating,” one user wrote.

“It was clearly something violent. The dog looks like something grabbed it and pulled it back, very unnatural for a normal movement,” added another.

“Something pulled her by the tail or hind leg and she even managed to turn her head to see whos is there.”

Others suggested that the dog just turned very sharply and ran away and there is nothing paranormal here. Or there was a glitch in the camcorder.