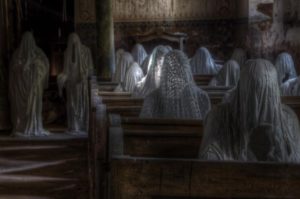 Ghosts, specters, spirits, phantoms, apparitions… There are many different terms used for the shadowy ethereal inhabitants that co-exist with the physical world.

When one thinks of ghosts, the first image that often pops into the mind is the moaning sheet covered ghoul with two inky black holes for eyes. These images are often depicted in cartoons or on Halloween gift cards.

It’s harmless to keep these “child safe” images in our minds in order to shield ourselves from what fears we may truly harbor. But should we really be frightened?

Since the ancients walked the earth so have ghosts. They have frightened the living and are often obnoxious and obtrusive. But some spirit beings have been known to be humorous, while others are even heavenly.

Many religions of the world, including the bible, mention the presence of ghosts, spirits, and demons, and their interaction with the living. But are they real? There is no real scientific explanation to prove nor disprove the existence of ghosts.

Researchers of the supernatural, many religious faiths, and a certain percentage of humanity believe that ghosts are disembodied spirits, earthbound spirits, spirit energies, or the essence of a deceased person that once lived on earth. Popular theories suggest that these spirits have not passed over properly into the next phase of life.

Some researchers feel that ghosts are “stuck in time” or a place. Many of these types of spiritual beings account for most of the sightings or hauntings all over the world.

Other theories suggest that these ghostly apparitions abide on this earth but that there is a thin veil between the living and the dead, where the two worlds come together and the dead move among us and interact with us.

And when these spirits contact us or are able to manifest themselves to us, this is regarded as a haunting or a visitation. But science and skeptics believe that ghost phenomenon can be easily explained away by means of natural occurrences, scientific reasoning, or by diseases of the mind which cause hallucinations or auditory misinterpretation.

There are many theories as to what ghosts really are and why they haunt places or people. Believer’s hypothesize why the spirit of the person stays behind. Theories are plentiful and varied but some of the most popular theories are among the following:

– Some people die suddenly or violently only to wake up in their new spiritual form and are confused. They either do not know that they are dead or rather choose not to accept the fact that they are dead. Many times they remain in the area where the they lived or died.

– They have unfinished business to take care of. Maybe family matters, worries, finances. They often feel the need to help their loved ones who are in distress. They remain with the family in order to bring comfort.

– Feelings of guilt for leaving family or friends behind, thus keeping them on earth and unable to move on to the next level of existence.

– They are attached to their old earthly environment, body, house, or a place in which they frequented and felt ties to and refuse to leave.

Why Haunt The Living?

Why do these amorphous, shadowy, and full bodied entities come back? To be heard and seen. They often have a message they need to get across to the living.

Sometimes what is perceived as a terrifying experience for a living person, having had an encounter with a spiritual entity, is nothing more than the ghosts way of grabbing our attention.

Other spirits are known to haunt dwellings because they are protective of what was once theirs (a house for example) and still consider it to be theirs and refuse to leave, often scaring the occupants out.

There are of course, hauntings that involve much darker entities that are not related to human ghostly hauntings. These are known as inhuman, demonic hauntings.

Other hauntings include those of poltergeists which is believed to be a “noisy ghost” that make sounds, move objects, and can even be heard or seen. Some researcher agree that it is brought on through the human mind, unconsciously, by someone that is in a highly charged emotional state.

Other researchers would disagree, putting this in the category of demonic or inhuman hauntings.

There are also darker human spirits that leave this world under bad circumstances. Where they were hateful and vengeful individuals in life, they take those emotions with them in death and refuse to move on.

Sometimes it is hard for spiritually gifted psychics or investigators alike to tell the difference between a negative human spirit and a demonic entity at a haunted location.

Some researchers believe there are cases of residual hauntings where the image or impressions of the past repeat themselves over and over much like a projection or recording. In these cases the living can see them but are unable to interact with them.

How Do Ghosts Make Themselves Known?

In most cases people are unaware of ghostly presences but for others they are able to sense, see, or hear them. These individuals are considered to have highly tuned abilities or gifts beyond the norm such as: Mediums, psychics, sensitives, intuitives, and clairvoyants.

Other ways in which a spirit is able to reach the living are through dreams. Often if a person is unable to hear or sense the spiritual, dreams are used to contact the living, often bringing warnings or messages of hope or comfort to the berieved.

Where Do Most Hauntings Take Place and how long they last?

Contrary to popular belief that hauntings only happen in creepy old haunted houses or graveyards, nothing can be farther from the truth. While hauntings do occur in old houses and graveyards, they can and do occur in just about anywhere.

Anyplace where death, violence, sadness, evil practices, or other various things may have occurred can make that place a prime target for a haunting.

There are no set rules where the spiritual are concerned, and no such place that a spirit cannot reside in or haunt. There is even a popular belief that inanimate objects can be haunted or possessed, as has been documented in numerous cases all over the world.

Some hauntings last for years, while others are only temporary, maybe days or hours. It is believed that once the spirit has accomplished, or completed its mission here on earth, it will move on.

Is There Proof Of Ghosts?

Many ghost teams, clergy, and paranormal researchers have been asked this question over and over. Some testify to the existence of ghosts having personally experienced an encounter, while others still search for the “elusive ghost” and validation.

Some churches teach that ghosts are nothing more than demonic spirits in the guise of friendly spirits in order to fool us.

But there are a number of open-minded clergy who would disagree having experienced a ghostly visitation firsthand and believe wholeheartedly that there is a differential aspect to ghosts and demonic spirits.

A vast majority of paranormal researchers use science to search for the answers. The use of Electronic Voice Phenomenon captures spiritual voices that are not audible by the human ear.

Electromagnet Field Meters capture electromagnetic fields or energies believed to be associated with a ghostly presence.

They also use digital thermometers, infrared cameras, thermal imaging, and other assorted temperature sensors while looking for variant temperatures being, “cold spots” and “hot spots” that are usually found in places with high levels of spiritual activity with astounding results.

Many researchers have captured orbs of light on film which are believed by some to be associated with spiritual activity, and in some cases, faces can be seen in the orbs.

Other psychic researchers use their “human radar” skills as mediums or sensitives, to sense the unusual in a particular place of interest. Psychics can play an important part in investigations.

But some teams refuse to work with them and base results solely on science, while others teams combine both science and psychic intervention while investigating. The results can be very positive.

In the final analysis, is there proof of ghosts? There are two popular adages to sum it up: “The proof is in the pudding” or “It’s all a product of the mind.” 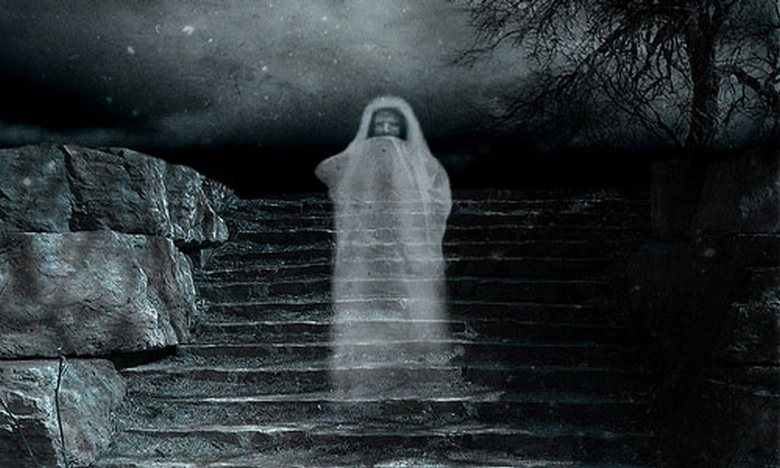 What Time Do Hauntings Happen?

Some experts in the field believe that most hauntings take place during the hours or 12 midnight to 5 am, or what is commonly known as “The Witching Hour.” Still, hauntings do take place at anytime and place where there is opportunity.

Do Ghosts Have Feelings or Emotions?

It is assumed that whatever feelings or personality a person had in life does not change after they die.

It makes sense to believe that we would still retain that part of our uniqueness in the afterlife, otherwise, why would the spirit of a loved one come back to bring comfort to the living? Much the same, why would would someone come back seeking revenge?

Whether one believes in the existence of ghosts or an afterlife it is irrelevant. This is one debate that will continue among believers and skeptics alike till the end of time as we know it.

All facts must be weighed carefully. As long as spiritual entities continue to occupy certain spaces on our planet, so the need for answers and proof also increases.

And there will always be skeptics who will never accept the existence of a spiritual world nor the afterlife. Most believe if something is not tangible, if it cannot be touched, felt, or seen, then it does not exist.

But for those who have experienced firsthand an unearthly encounter with the afterlife, there is no amount of convincing or debunking otherwise that would ever change their minds.

In the end, there is only one way to know the truth for sure. One way we will discover if life continues on and the spirit lives on… When we die.