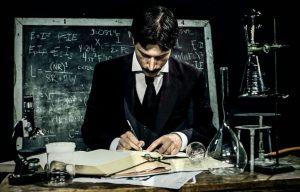 They called him a dreamer, mocked at his ideas, but time put everything in its place. Nikola Tesla was amazingly talented. He made his discoveries easily, as if in jest.

He said that technical solutions come to his mind on their own. Tesla is considered one of the most brilliant people of all time (along with Leonardo da Vinci).

Tesla’s work made possible the development of modern electrical engineering. His inventions were more than one century ahead of their time. Tesla knew how to change reality with the help of consciousness.

Here are 25 quotes from this great inventor.

1. “My brain is only a receiver, in the Universe there is a core from which we obtain knowledge, strength and inspiration. I have not penetrated into the secrets of this core, but I know that it exists.”

2. “If you want to find the secrets of the universe, think in terms of energy, frequency and vibration.”

3. “When wireless is fully applied the earth will be converted into a huge brain, capable of response in every one of its parts.”

5. “What we now want is closer contact and better understanding between individuals and communities all over the earth, and the elimination of egoism and pride which is always prone to plunge the world into primeval barbarism and strife… Peace can only come as a natural consequence of universal enlightenment…”

6. “In a crystal we have clear evidence of the existence of a formative life principle, and though we cannot understand the life of a crystal, it is nonetheless a living being”

7. “The day science begins to study non-physical phenomena, it will make more progress in one decade than in all the previous centuries of its existence.”

8. “Today’s scientists have substituted mathematics for experiments, and they wander off through equation after equation, and eventually build a structure which has no relation to reality.”

9. “The desire that guides me in all I do is the desire to harness the forces of nature to the service of mankind.”

10. “The scientists of today think deeply instead of clearly. One must be sane to think clearly, but one can think deeply and be quite insane.”

11. “In a time not distant, it will be possible to flash any image formed in thought on a screen and render it visible at any place desired. The perfection of this means of reading thought will create a revolution for the better in all our social relations.”

12. “Our entire biological system, the brain, and the Earth itself, work on the same frequencies.”

13. “Invention is the most important product of man’s creative brain. The ultimate purpose is the complete mastery of mind over the material world, the harnessing of human nature to human needs.”

14. “We are whirling through endless space, with and inconceivable speed, all around everything is spinning, everything is moving, everywhere there is energy. There must be some way of availing ourselves of this energy more directly. Then, with the light obtained from the medium, with the power derived from it, with every form of energy obtained without effort, from the store forever inexhaustible, humanity will advance with giant strides. The mere contemplation of these magnificent possibilities expand our minds, strengthens our hopes and and fills our hearts with supreme delight.”

15. “If your hate could be turned into electricity, it would light up the whole world.”

16. “Every living being is an engine geared to the wheelwork of the universe. Though seemingly affected only by its immediate surrounding, the sphere of external influence extends to infinite distance.”

17. “The motors I build there were exactly as I imagined them. I made no attempt to improve the design, but merely reproduced the pictures as they appeared to my vision and the operation was always as I expected.”

18. “Though free to think and act, we are held together, like the stars in the firmament, with ties inseparable. These ties cannot be seen, but we can feel them.”

19. “How extraordinary was my life an incident may illustrate… [As a youth] I was fascinated by a description of Niagara Falls. I had perused, and pictured in my imagination a big wheel run by the Falls. I told my uncle that I would go to America and carry out this scheme. Thirty years later I saw my ideas carried out at Niagara and marveled at the unfathomable mystery of the mind.”

20. “Money does not represent such a value as men have placed upon it. All my money has been invested into experiments with which I have made new discoveries enabling mankind to have a little easier life.”

21. “Electric power is everywhere present in unlimited quantities and can drive the world’s machinery without the need of coal, oil, gas, or any other of the common fuels.”

22. “Most certainly, some planets are not inhabited, but others are, and among these there must exist life under all conditions and phases of development.”

23. “Our bodies are composed of molecules of various elements, harmoniously united. Do these molecules retain any after-effect when the body is dissolved? To ascertain this take, say, two molecules of hydrogen from the body of an individual and also one molecule of oxygen. Furthermore, provide another molecule of oxygen taken from some other body. Now place the two molecules of hydrogen so they can combine with the oxygen, and if they prefer that molecule of oxygen with which they were previously united, then reincarnation is proved. For, though it may take ages and ages, ultimately the molecules which constituted that body will get together again, just as in a vast city individuals from a distant land finally meet and establish close contact.”

25. “As I review the events of my past life I realize how subtle are the influences that shape our destinies.”

Nikola Tesla left behind a legacy that can inspire the leaders of today. He had a vision of a better world, one that used technology to solve problems and lift others up. Tesla also loved the quest of discovery and innovation above all else. That was a priority to him above simply making as much money as possible.