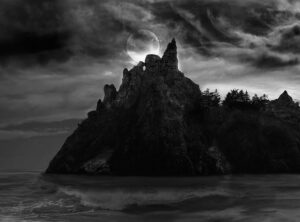 Kenya houses one of the biggest unsolved mystery in the world, it is an island named as Envaitenet, which means “no-return” in local el-molo language of the tribe. It is situated on the Rudolf Lake, reports eastcoastdaily.in.

The island is just several kilometers long, though many tribes and locals live around the places near to it, no one lives in that island, as it is a popular belief that the place is cursed.

Locals say that many used to live on the island many years ago; they fished, hunted, traded with their relatives on the mainland. However, the island residents suddenly stopped coming to the mainland at all. Then several men from the waterside village came to the island to see what happened.

When they reached the island, they were struck dumb: they saw a deserted village with huts full of various things, and fish was rotting near extinguished fire. There was no sign of any human there. “Scouts” left the island very quickly, and decided not to try their fate. Nobody except for birds ventured to go there again.

Another story of disappearance of two researchers during 1935 is there, whereBritish explorer Vivina Fusch he sent on the island of two colleagues – M. Sheflis and B. Dayson. Several days everything was normal: every evening in agreed time they gave the signs the lit lamps meaning that at them everything is all right.

Then signals stopped and when in two weeks concerned by long absence of companions several members of expedition went to the island, they with surprise noted that Sheflis and Dayson … disappeared.

It is more than that: no traces indicating stay here people were revealed! Local authorities provided the plane which made several days’ flight of the island.

Then people of the tribe el molo, tempted with huge remuneration, in literal sense turned each stone on the island. But neither remains of members of expedition, nor any objects which could shed light on their disappearance it was not found.

The oldest mention of “the bewitched island” and the people disappearing from it belongs approximately to the 1630th years. Then on Envaitenet’s island several families of natives lodged too, and among the fertile nature population of the village began to increase quickly.

One seemed strange: on the island there were no animals and birds. Only violent vegetation of some extraordinary bright emerald shade, hill smooth, as if polished, stones of brown colour which had “tendency” to appear, to disappear, and still strange sounds which islanders heard each new moon: the terrible, chilling shouts whether an animal, whether the person turning into lingering groan which usually lasted from several minutes to an hour.

Over time some parts of the island became inaccessible for people: branches of trees very firmly intertwined with next and became firm as if stone, forever blocking to persons interested an entrance deep into sushi.

But visions which visited residents of the village at night were the most frightening. It were fancy colour images of the unusual beings who are bearing a faint resemblance to people: over the village the whole sketches after which people lay for hours as though in a coma “were played”, not in forces to stir.

The saddest that after similar “representation” to someone from natives surely there was a misfortune: people became cripples, being traumatized literally from scratch, and even perished, having got poisoned with absolutely fresh fish, got blood poisoning from an insignificant cut or, being excellent swimmers, sank in waters of the quiet lake.

Over time began to seem to residents of the village that their island is inhabited by the terrible monsters cannibals not similar on one animal who was known to them.

Such monster appeared directly before the person at the most unexpected moment, and here everything decided how quickly the native runs. The poor creature should have stood gaping slightly, and he was literally dissolved in air together with the awful thief.

Several juvenile children were gone from under a nose at the mothers, and it was not succeeded to find them. Life in once prospering village became intolerable, besides its inhabitants appeared in a peculiar isolation: relatives from the coast, on the skin the tested delights of hospitality of islanders, did not hurry to them with visits.

And when in several months several concerned el molo nevertheless came on rafts to the island, it turned out that the village is empty. However nothing indicated traces of fight or urgent departure of inhabitants: onions and arrows were accurately put in a corner of each hut.

There are in local legends also mentions of mysterious fire, vomited by the certain steep pipe on the island covered with “the clapping cover” and the corridors going deeply to an earth subsoil.

There, according to legends, “fire sowing an infection and throwing” the giant to Wat Usum of Tong Duuray lives. And still, if to trust stories of the tribe el molo, from time to time directly at the island from fog the city rises.

It is poured in all flowers as if the night rainbow which fell by the earth. Rise over the night lake of a wall and tower, surprising and multi-colour, as if the handful of jewelry was thrown from the star sky on the earth.

However it is well visible that many amazing towers are dilapidated, and from many palaces there were one ruins. At such moments it seems that from the illusive city the strange pulsing sound – the certain funeral song rushing over the lake and over this magic city floats.

The sound happens that soft and gentle, becomes shrill and causes a headache. After such images members of the tribe long had some unknown illness which is followed by an ache in muscles of all body, disgust for food and sharp decrease in sight.

The babies born to pregnant women who gave birth after this soon died, because the babies, despite tropical climate were born, were mummified immediately. All these miracles did not allow el molo to live quietly, and they were forced to move from coast of the lake closer to a forest strip.

At the end of the 20th century, having heard about the bewitched island, two private expeditions went there (from Holland and Germany), but both of them disappeared, without having left behind any traces.

The secret of the island of Envaitenet remains still unsolved.