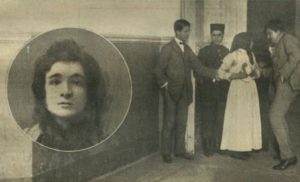 Little is known of Enriqueta Martí i Ripollés life before she arrived in Barcelona in the early part of the 19th Century. What is known is that she arrived with a brutal penchant for survival and an equally fierce desire to rise above poverty that she would soon sadistically twist to her advantage.

She initially found lodging and employment in the homes of the aristocracy. But the role of servant girl did not sit well with her and nor did it last. Martí was nothing if not a quick learner.

Her time smoothing the satin sheets and sweeping the great marble floors of Barcelona’s elite gave her the chance to observe the lives of the privileged. In 1895 she married a painter named Juan Pujaló, but the marriage failed, and according to her husband, Martí’s affairs with other men, her character, and her continuous visits to houses of ill repute caused the separation. The pair reconciled and separated approximately six times.

Martís’ first foray into Barcelona’s underside was through prostitution. She quickly realized that although she had no material belongings, her body was a ready source of currency. Her numerous clients included many men of standing, men who would in the future come to her aid and indeed provide ready customers for her horrific product line to come.

Nothing in her life happened by chance, every detail another careful rung in her ascent toward power. Social tensions in the city reached breaking point in 1909. ‘La Setmana Tràgica’ (Tragic Week) would see much destruction of public property and with the increased police presence the discovery of the brothel from which Martí plied her trade.

This could have been the end of her upward mobility and aspirations, but the ground work had been well laid. Certain hands had been shaken, certain legalities overlooked and the soon-to-be ‘Vampire of Barcelona’ had her freedom.

And so the darkest chapter in the life of Enriqueta Martí began. Again, feeding off the information she gleaned from her exposure to the depravities of the rich she set to move into an entirely different line of work. She was no longer the poor girl who swept and polished, she was now a woman of some means.

Her various apartments throughout the city would be put to good use as she cleverly switched lodgings and personas to protect her horrible secret. Her targets became children, young children from Barcelona’s destitute Raval Quarter.

She would prostitute them to the pedophiles and deviants who had for so long protected and frequented her brothels. She could at once appear impoverished, dressed in rags to entice her prey and then as evening fell, attend the lavish galas of the El Liceu (Barcelona Opera House) as gentry.

As abhorrent as her new business venture was, still much worse was to come. Not content with satisfying her male clients she set about attending to the cosmetic needs of their wives and mistresses.

She slaughtered a great number of unwanted and abandoned babies and children, ranging from infants to the ages of nine, and extracted from them certain base ingredients. Body fat, blood and ground bone were rendered to create a line of various elixirs and facial creams.

But again, this was no chance endeavor – this was calculated cruelty for optimum gain. Martí knew that certain dark voids of high society craved the perceived age-slowing benefits of infant flesh, this was simple supply and demand. 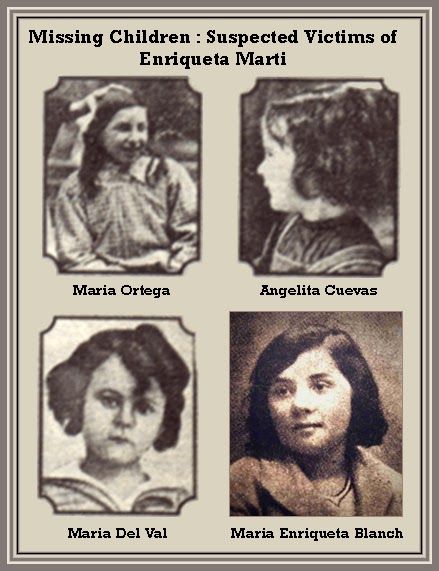 Marti continued unabated before finally being discovered in 1912 by a vigilant neighbour who alerted police. During the police raid at her apartment, two girls were found in the flat, one of whom told how she witnessed the murder of a five-year-old boy called Pepito on the kitchen table.

The actual number of children formally recorded as murder victims was twelve, but it is thought Marti, who became known as the ‘Vampire of Barcelona’, may have killed ten times that number. In jail awaiting trial, she was lynched by fellow prisoners in 1913.

The fact that Enriqueta Martí was killed by fellow inmates as she awaited sentence was of little comfort to the families of those who died and of even smaller consequence to those who abetted her.