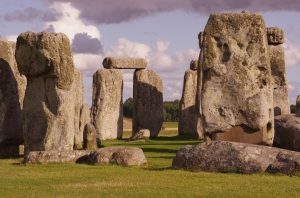 Prehistoric Stonehenge has mysteries, including how megaliths, massive stones, were brought there from far away sites. A new theory may have the answer.

Stonehenge was constructed from megaliths, derived from the Greek terms “megas” and “lithos,” which means “great stones.” Monolith refers to a single massive stone shaped like a pillar. When those enormous stones are arranged in circles, they are called henges or cromlechs.

It’s thought that Stonehenge, built on Salisbury’s chalk plain in Wiltshire, was completed around 1500 BCE. Castlerigg Stone Circle, also known as Keswick Carle and Druid’s Circle, lies in the Lake District, of Cumbra. This cromlech was likely built around 3200 BCE, which makes it one of the oldest megalithic structures in Europe.

Henges have many mysteries. One of them is how such heavy rocks, some of which weigh as much a fifty tons, could be moved from far away places in prehistoric times. Perhaps, a news item released on December 1, 2010 has the answer.

Bluestones, used to build Stonehenge’s inner circle, weigh up to four tons each. It’s believed they came from Wales’ Prescelly Mountains, about two hundred and forty miles away from Stonehenge. It’s believed that the stones were lugged over land and carried by rafts in the waters.

The outer ring was constructed with huge sarsen stones, each weighing as much as fifty tons, and these were hauled from Marlborough Downs, approximately twenty miles away. It’s estimated that it took more than six hundred men to get the stones by Redhorn Hill.

Theory: How Stonehenge’s Megaliths were Transported

Engineer Garry Lavin postulates that giant wicker baskets were used to haul the four-ton rocks from a Welsh quarry. He said he thought that dragging the gargantuan rocks over land was impossible because of surface friction.

He realized that the people who built Stonehenge made woven items and some wells were filled with baskets. Lavin said he moved a one-ton boulder in a wicker contraption he made in the summer of 2010 and hopes to have made a basket large enough to transport a five-ton rock around the 2011 summer solstice on June 21st.

While scientists agree that this is plausible, can this account for over six hundred prehistoric men moving fifty-ton boulders for a distance of about twenty miles? Or does this only apply to the Welsh ones? How many people would it take to weave a basket? How long would such a project take?

While it’s unknown who actually constructed Stonehenge, the prevailing theory is that it was the work of the Druids. Julius Caesar and others wrote about the Celtic Druid Priesthood circa 55 CE, the time of the first Roman conquest in Britain.

There are problems with this theory. The megaliths had been there for 2,000 years. Druids worshipped in forest temples, not in henges. It’s more likely that people of the late Neolithic period, circa 3000 BCE originally built Stonehenge and, later, the Beaker Folk continued construction. Megalithic sites have been found in places throughout Europe where the Druids didn’t live.

Stonehenge’s original purpose is shrouded in mystery. Speculations include that it was a place of worship, an astronomical observatory for marking significant events, a place of worship or a sacred burial site for high-ranking citizens. Evidence exists to support the theories, but there’s no one that totally explains the cromlech’s purpose.

Lately, an ancient Mediterranean boy’s skeleton, sporting an amber necklace, was found near Stonehenge. The find added credence to the theory that pilgrims traveled from far distances to visit the henge, so it’s likely that it was regarded as a religious or healing center.

A May 2008 news item indicated that Stonehenge’s megaliths could have been gravestones for a prehistoric dynasty, as suggested by new radiocarbon dating. It’s estimated that up to two hundred and forty people were buried at Stonehenge, primarily in the Aubrey Holes. Artifacts found with the human remains indicate that they were members of an elite class.

Researchers have performed studies of the site which have shown an astronomical relationship in the stones’ placement. One hundred and sixty-five placements of the sun and moon correlate with solstices and equinoxes, which are Pagan Sabbats or Fire Festivals. It’s also possible that this was only a way to mark agricultural dates or both.

It’s possible that Stonehenge served all of these purposes; however pure scientific proof is lacking. Perhaps, Lavin’s theory will be proven to be true. If so, at least one mystery will be solved.

Puma Punku: One Of The Most Intriguing Ancient Site