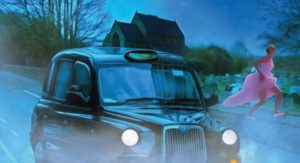 On the chilly Monday night of 13 February 2006 a 30-year-old Hackney driver named Lewis Missenden was flagged down in his vehicle on Berry Street by a young lady who was dressed in what looked like a pink wedding gown.

The time was fast approaching midnight when Missenden pulled up and remotely unlocked the passenger door. The brunette got in smiling and slammed the door rather hard before almost falling onto the seat.

“Wait a moment while I get my bearings I’m a bit tipsy”, she said in a well-spoken voice, and she giggled, then seemed to recall the destination as her eyebrows rose.

She said: “Windy Arbor Road please. Do you know where that is?”

“Yeah, I used to live up near Whiston”; said Lewis Missenden, turning on the meter, “had a nice night?”

“Oh yes”, said the passenger, and she gripped an eyelash between her finger and thumb and grumbled something unintelligible as she gently tugged on it.

“Where’ve you been if you don’t mind me asking”, said Missenden, trying to make pleasant conversation.

“Flintlocks? Never heard of it, but there are so many clubs sprouting up nowadays, it’s hard to keep track of them, said the driver.

“Is that a wedding gown you’ve got on?”

The girl suddenly looked at the floor of the hackney and stopped smiling. She said nothing. Lewis Missenden realised he’d somehow upset the girl with his query so he changed the subject quickly.

“Been following the Winter Olympics?” he asked.

The woman continued to look down with a sad expression.

Lewis got the message the passenger didn’t want to talk, so he put the radio on, and not a word was spoken between the driver and the passenger during the twenty-five minutes of that nine-mile journey. As the Hackney cab reached Windy Arbor Road, Lewis turned on his intercom and asked, “Where about, love?”

“Just a bit further along by St Nick’s Church up there,” said the girl, and a minute later she shouted: “Just here will do!”

The girl got out the cab, and Lewis leaned over to the kerbside window, ready to tell her how much the fare was when the lady ran the couple of feet towards the low wall surrounding the cemetery of St Nicholas and jumped over it.

The moon was full that night, and Lewis saw the girl literally vanish as she landed on the other side of the wall.

He got out of his taxi, walked in shock to the two-foot-tall wall, and surveyed the moonlit cemetery. The girl was nowhere to be seen.

At first he thought she had been some very agile fare-dodger, but he slowly realized that he had given a lift to a ghost in his hackney, and he felt as if that ghost was watching him.

He got back into the cab and went to an all-night café in south Liverpool that was frequented by other cabbies, and here over a black coffee and microwaved pork pie, he told his story of the ‘pink bride’ to an older taxi driver named Ian.

Tony Mack had her in his cab about two or three years ago, Ian casually told Lewis, who returned a suspicious glance.

“You winding me up?” the younger cabby asked.

Ian slowly shook his head as he read the tabloid spread out before him.

“I twigged when you mentioned Flintlocks; that place closed years ago. Used to be on Wood Street. And if my memory serves me I think it was Valentine’s Day when she got in Tony Mack’s cab. I’ve got his number here.”

Ian called Tony on his mobile and handed it to Lewis, and the latter told Tony what had happened, and Tony said the passenger had been brunette, hair styled in a bun, and had worn a type of pink wedding dress with a small train.

She had run into St Nick’s cemetery. All these facts matched the lady who had sprung from Lewis’s cab and vanished.

Tom Slemen mentioned the case on a local radio programme and received lots of feedback on the ghost, who has been hailing cabs since around 1977, but so far, he has not been able to identify her.

Tom assumes she’s buried in the hallowed ground of St Nicholas Church. Someone out there probably knows the sad story behind the pink bride…