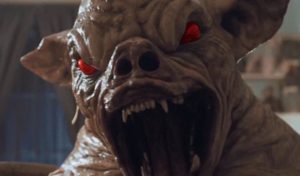 “Do not stray off the path!” Isn’t that the warning given to children in fairy tales, else they encounter danger in the form of a big, bad wolf… or something worse?

Katty and her friend Staci did stray off the path into the foreboding woods one October afternoon, and what they met there would haunt the nightmares of any child. This is Katty’s story…

I live in the country, just outside of a few medium-sized towns in Western Illinois, very close to the Iowa/Illinois border near the Mississippi River. I’ve had a few paranormal experiences before, ranging from when I was pretty small up until now. Some of my other family members have had some as well.

I’ve told very few of this experience because I was afraid people would think I was crazy or lying, but I swear on everything dear to me that this happened on an October day 11 years ago. I was 15 at the time (I’m 26 now).

My grandparents took my best girlfriend Staci and me to run errands with them one afternoon, and they decided it would be fun to take us to a pumpkin patch since it was so close to Halloween. This pumpkin patch was a few counties northeast of us, I think, and it was a lot of fun.

It had hayrides, a corn maze, and a barn where we could get apple cider and other harvest goodies. Of course it also had a really big pumpkin patch where we could pick our own pumpkins right off the vine.

There were quite a few families with young kids there that day. I remember it was really sunny and unseasonably warm for October. Grandma and Grandpa told us we could go off on our own and explore the farm (since we were older and didn’t need supervision in their opinion), so Staci and I made off for the pumpkin patch, which I think took up about six acres.

I think that’s what the sign on the road said; the pumpkin patch was just huge and sprawling.

The pumpkin patch wasn’t laid out in a straight, level field or square, like a lot of them are. There were little dirt paths, hills, a stream, and small thickets and patches of trees that separated and split up parts of it. It twisted around a corner, behind the woods a little, if you can imagine what I’m describing.

Staci and I were having fun walking the length of the pumpkin patch and exploring all the little nooks and crannies of the field, and we finally turned around that corner at the very tail-end of the patch, so that we were out of sight of the main farm where my grandparents and all the other customers were.

When we went around that bend, we saw that we were facing a pretty dense thicket with lots of trees. We could see that the woods extended up a decent sized hill, and that there was a rocky crevice forming part of that hill. There was water running down the crevice in the form of a small waterfall that emptied out into a brook at the bottom at the base of the trees and ran into the woods somewhere out of sight.

I remember we just stood there in awe because it was really pretty, with the sunlight shimmering in the water and all the red and orange leaves falling all over the place. Staci got the bright idea to see how far back the brook went from the waterfall. Staci was always rather bossy, and though I felt like we shouldn’t, we went anyway because I didn’t want to argue with her.

We stepped over the boundary of the end of the pumpkin patch and into the thicket. Almost immediately, after about ten steps following the stream, we came upon a small, brick building.

I don’t really know what it was for, but it was made of red brick, was pretty low to the ground, and had a square-ish/hexagon shape to it. It had a chimney up one side, one door made of metal, and a window on at least two sides of it. It was way too small to be a house, even for one person. It reminded me of the little bathroom buildings found in some public parks.

And here’s where the terrifying thing happened.

When Staci and I walked around the side to inspect it, in the window on the right side of the building there was a face peering out at us! I know this sounds stupid, but it looked like a pig with pitch black fur or skin on its face, opaque red eyes, and really long, sharp teeth hanging out of its mouth.

The teeth were not long tusks like a boar’s; it didn’t have tusks. They were more like human teeth of all the same length that were freakishly long jutting out of its mouth!

The expression on its face is what scared me the most. It looked mean, angry, or hostile. It looked like it wanted to hurt us. And it must have been tall because I could tell it wasn’t on all fours like a regular pig would be. To be looking out the window, it had to be standing or at least hunching over like a man on two feet.

As soon as Staci and I set eyes on this creature, she said, “Oh my god!” And the thing screamed! It was like the sound a cow makes when it’s mad or stressed, but crossed with a human. It wasn’t a scared shriek, it was like it wanted to attack. As I said, I got the feeling that it wanted to hurt us or was angry that we were out there.

We both screamed and almost pushed each other over trying to run from that little building. I didn’t know if it was behind us or not, but I was in survival mode and didn’t look back to check.

We finally reached the edge of the pumpkin patch, jumped over the brook, and ran the whole six acres to the farm. Once we got to where all the other people were, Staci just stopped and stood, frozen, by a vegetable stand and wouldn’t move. It was like she was in shock. I went to the open barn where Grandma and Grandpa were talking to the guy who owned the farm. They saw my face and knew something was wrong.

Grandma and Grandpa and the farmer ushered me back behind the barn so the little kids and families wouldn’t hear whatever I had to say. I told them exactly what we’d seen.

Grandpa didn’t want to believe me and said we just spooked ourselves. We went and got Staci, who was still by the front of the barn looking traumatized. When they were finally able to get her to talk, she told them the exact same thing.

WHAT THE FARMER KNEW

Here’s the thing: As soon as the farmer realized which little brick building we’d seen, his face just went white. It looked like he’d been slapped. Grandpa asked him what was the matter. The farmer whispered something to him and Grandpa told us to go wait in the car. We did.

When Grandpa came back, he looked very shaken. He got in and told Staci, Grandma and me what the farmer confided to him. The farmer’s family had owned that property for almost a century, and back in the 1930s the farmer’s uncle had told them all that he’d seen a “demon” that looked like a pig in the woods and that it lived in that little building.

The farmer’s family didn’t believe his uncle, thinking he was making up stories or maybe was becoming mentally ill. Then, at the tail-end of the ’30s, his uncle went missing for about five days.

Finally, one of the family members found his uncle’s dead body in that little building. Not a mark on him, and the coroner couldn’t figure out what happened; he had been perfectly healthy, in his late teens/early 20s, and had no injuries they could find. He’d just dropped dead on the floor of that little brick building for no apparent reason.

The farmer also told Grandpa that once in awhile he still hears some unidentifiable animal shrieking or howling out in the woods at the edge of the field, but can’t identify what kind of animal could make a sound like that. The farmer’s family always reported that sound off and on on that property since his uncle’s death.

Electronic Voices From Beyond the Grave