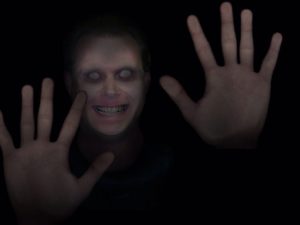 At about 9:45 pm, on October 11th, 1966 two boys, Martin Munov and James Yanchitis, were walking home in Elizabeth, New Jersey.

The boys soon came to the corner of 4th Street and New Jersey Street. The elevated NJ turnpike was overhead.

A steep bank of about 30 feet runs from the Turnpike to the street below and was blocked off by a tall chain link fence. The boys were at a point directly across the street from the fence. Munov and Yanchitis had never seen anyone behind the fence before, but that night would be different.

Yanchitis would see the grinning man first and after nudging his friend, Munov saw the man also. The area was well-lit by the street lights so the two were able to see the strange being clearly.

At first his back was towards the boys, but they could see that he was wearing green sparkling coveralls with a wide black belt, was well over 6 feet tall, and appeared to be bald.

Then the Grinning Man turned and was looking straight at them. The boys reported that the man had a huge, ear to ear grin, with a dark complexion and beady dark eyes, set unusually wide apart.

Yanchitis and Munov were terrified by the stranger and quickly left the area, leaving the Grinning Man behind. Strangely, when interviewed by police later that evening, the two could not recall if the Grinning Man had a nose or ears.

The 3 were impressed with the boys and believed that they were being honest and reporting a real event. Whether correctly or not, Keel made a connection between the Grinning Man report and UFO sightings which he claimed occurred nearby and at nearly the same time.