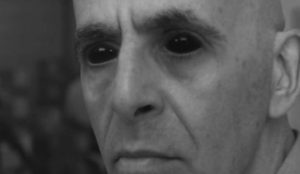 It was September 2, 2000, and one of the roles as an executive is you sometimes have to put in really late nights. My office was on the fifth floor and it was coming up to 12 in the morning. I was the only employee, as far as I know, on the first five floors apart from Ben, another fellow banker on my floor and Stan, who is a security officer.

I decided after finishing the files I was doing that I was going to go home. I said farewell to Stan, who more or less grunted and took the hall to the elevator. I then pressed the B2 level as the B levels are the car parks.

As I’m descending, the elevator flashes that it has been called to floor 2. I thought it was very strange, seeing as I said the only other two people on the first five floors where me, the banker and Stan. Regardless, the elevator stops at floor 2 and in comes a tall man with more or less a black crew-cut.

The first thing i did was open my mouth to ask what sector he was from and who gave him permission, but as I looked into his eyes they where entirely black. The pupils, the retinas everything. I remember not really being spooked about his eyes.

To be honest, I just thought he might’ve had a disability in his eyes. As the elevator slowly starts up moving back on route, he asked me where I was going, and I simply replied, “home.”

He then asked why, and I more or less laughed and just said I want to go to sleep and see my wife. He then just mummered very softly, like he was talking to himself, “It must be nice to have a home.”

I figured he was just being friendly and that he must be renting. As we got to B1, I realized he hadn’t pushed the button on where he was going, so I asked, “Where are you going?” to which he replied rather angrily looking at me with his creepy eyes, “Nowhere.”

Feeling a little annoyed with his outburst that made zero sense at the time, I was glad to leave when we reached B2. As I walked to my car, which was roughly 10 meters from the lift, I saw that he didn’t get out; in fact, he hardly moved.

He just kept staring at me and where I was walking to. Starting to get freaked out that the guy was some warped-out creep, I ran the little distance to my car and turned to see the lift was on a ascent up to floor 6. Feeling a little relieved, I drove up the ramps and coming to the security door I swiped the card and drove out onto the road.

Now the real freaky part. As I drove down the street, all the lights were out – and this is in Sydney (city of NSW). Then I turn… and guess who is walking just ahead of the car – our favorite black-eyed man! No need to say, I sped home, probably breaking five road laws. How could he have left the building and be ahead of me when he had no car, and went up to floor 6?

It gets weirder. On the videotapes and records, there shows no one using the elevator at that time apart from me. To this day, I don’t know if it was my hallucination or if I encountered some dark entity.