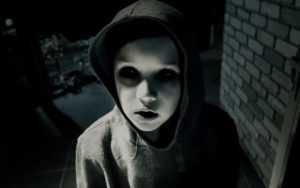 This account of a pair of BEKs in Pittsburgh, PA was recently sent to us. Oddly, one of the children doesn’t seem to have fully materialized during this encounter. This led the witness to believe he had seen a ghost, but perhaps it’s a clue as to the true nature of these beings.

My wife and I moved to Pittsburgh, PA in 2001. She had family in the area and she’d always wanted to be close to them. At first, we rented an apartment for a year while we settled into new jobs. Once the year was up and we had decided to stay in the area, we started looking for a house.

By 2002, we moved into our own house, a one story place that we found for a good price. The neighborhood was clean and quiet and within a couple of months we had met most of the families on the block. It was a great place to live.

My wife and I both worked about the same hours, so except for occasional overtime, we usually arrived home around the same time. This strange incident happened to us in September of 2002. It was a weekday around the later part of the month.

I got home first and my wife about a half hour after me. We talked for a minute but my wife wasn’t feeling too well, so she went to the bedroom to lay down. I was sitting in the living room, watching some sports.

About fifteen minutes after my wife had gone to the bedroom, there was a knock at the front door. It was sort of loud and I didn’t want it to wake her so I put my drink and the TV remote down and quickly got up.

It was strange because the knocking just kept going, the person wouldn’t let up. When I opened the door, there was this kid standing on the step. He was wearing a gray hooded top and his hands were stuck in the pockets.

I wondered for a moment how he had been knocking because his hands were in his pockets. I’d never seen this boy in the neighborhood before. He was staring straight at me and his look was rather mean. Before I even said anything, this kid says ‘I want to come into your house now.’

The hair on the back of my neck went up, this kid’s tone was so cold. He looked about ten years old, and this didn’t sound right coming from him. I looked at him and realized his eyes were solid black. I felt like I was starting to panic. I don’t know why I did it, but I looked beyond him, out to the street.

Maybe I was hoping there was someone else out there, I don’t know. When I looked back at the boy, I only glanced at his face, I couldn’t stand those eyes. Then I glanced down and realized I couldn’t really see his feet. I know how strange this sounds, I don’t really know how to explain it, it’s almost like his legs just faded away.

I slammed the door on him and turned around to see my wife rushing into the room. She looked frightened and said to me; ‘There’s a kid knocking on the bedroom window and he has black eyes!’

There must have been two of those kids, but I simply can’t imagine that they were able to get away from the house so quickly. There was something so unnatural about the boy I saw standing on the steps, and I’ve never understood why I couldn’t see his feet.

For a long time, I thought that we had seen ghosts. It’s only in the past year that we came across stories of the black eyed children on the Internet. We now believe this is what we witnessed. Thankfully, they never returned.

On The Edge Of Time: The Mystery Of Time Slips

The House That Dripped Blood