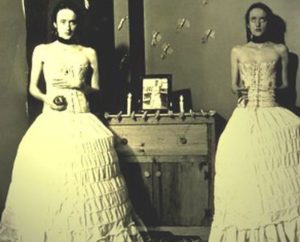 Julie Von Guldenstubbe was just 13 years old in 1845. Julie was a student at the exclusive Pensiunat Von Neuwelcke school in France, a school that educated the daughters of the French nobility.

Julie was at the school when the new teacher arrived, 32-year-old Emilie Sagee. Miss Sagee was apparently an outstanding practitioner of the teaching profession, yet considering her background, Emilie Sagee seems to have been a rather puzzling choice for the position.

There certainly must have been concern about hiring Miss Sagee, not because of her work in the classroom, or the results she achieved with her students. The problem was her history. At age 32 Sagee had been teaching for half of her life, in those 16 years she had been fired 18 times.

As best as we can tell, all of Sagees firings came not from misconduct, but rather the strange and disturbing phenomena that seemed to surround her, specifically, a Doppelganger. Doppelganger is German for “Double Goer” and is said to be an exact duplicate of the physical person.

One of the unusual aspects of the Sagee Doppelganger is that, while Doppelganger’s are usually said to be only visible to its physical counterpart, Emilie Sagees Doppelganger was supposedly seen by others, lots of them, including Julie Von Guldenstubbe and the other girls at the Pensiunat Von Neuwelcke.

Julie is one of, and perhaps the only one on record about what went on at the school. That fact alone does not mean that the story is not true, but it does raise the possibility that the story is the creation of a young girls mind.

Whatever the case may be, here’s the story of what happened at Pensiunat Von Neuwelcke according to Julie Von Guldenstubbe.

Julie tells the story of seeing the Doppelganger one day during a class at the school as Miss Sagee was writing on the chalkboard. Julie claimed that she and others were watching when the Doppelganger appeared in front of the class.

Julie said the apparition appeared to the side of their teacher and seemed to be identical in appearance. The Doppelganger performed Sagees every move except it had no chalk in its hand. What happened at that point seems to be unclear, did the apparition disappear? We don’t know, the story is incomplete.

In Julies second story there were reportedly over 40 girls to witness the Sagee Doppelganger, many more than the dozen or so in the first report. This time the girls are said to have been in a sewing class with another teacher.

A large window allowed an excellent view of the schools garden, and as all could see, Emilie Sagee was in that garden picking flowers. When the teacher in the classroom left the room to speak with a supervisor, almost immediately the Sagee Doppelganger appeared in front of the class, sitting in the teachers chair.

Sagee was still clearly seen to be in the garden as the Doppelganger appeared motionless in the chair. Two of the girls, brave ones I guess, decided to approach the entity.

One of them reached out to touch the apparition and felt a strange resistance and later said the Doppelganger felt “empty” and felt somewhat like cobwebs. The other girl approached the entity from the front and stepped between it and the desk, at which point the Doppelganger is said to have slowly faded away.

In 1994, a report was published in the British Journal of Psychiatry. In that study it was stated that the most reported type apparition was not a ghost, but rather, the apparition of living human beings, the Doppelganger.