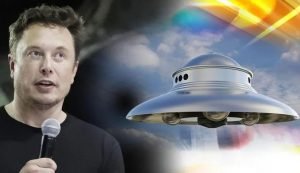 The billionaire founder of Tesla and SpaceX Elon Musk surprised his fans with a recent tweet about the existence of UFOs.

Three months ago the Pentagon shared a bombshell report that didn’t rule out aliens existing.

The long-awaited report was released in June and detailed what the government knows about a series of mysterious flying objects that had been observed in military airspaces over the last several decades.

Now Musk has seemingly said he believed there could be visitors from another world.

On Tuesday, the SpaceX CEO wrote on social media he believed that life on other planets exists. He tweeted: “I’m not saying there are UFOs … but there are UFOs.”

Responding to a Tesla owner’s video test of the car’s ‘full self-driving’ functionality, Elon Musk explained that his cars can avoid any obstacles from up above – even UFOs.

“In principle, even if a UFO crashed on the road right in front of you, it would still avoid the debris,” Musk wrote.

One said: “With all the SpaceX flights you did…I’m pretty sure you have tons of Monitors into a Dark Room where you keep watching the classified images your cameras get.

“But the question is: Does NASA monitor it as well? Release the secrets Elon. Life is too short.”

Earlier this year, Musk said while he has not seen any evidence of aliens, there could be “dead civilisations” out in space.