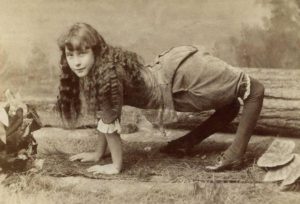 Ella Harper was born on January 5th 1870 with a very rare orthopaedic condition that caused her knees to bend backwards, called congenital genu recurvatum. In layman’s terms, Ella was born with knees that could bend the other way, allowing her to walk on all fours.

Her preference to walk on all fours resulted in her nickname “Camel Girl”. She was born as a twin, although sadly her twin brother Everett died at 3 months old.

In 1886 Ella was featured as the star in W. H. Harris’s Nickel Plate Circus, appearing in newspapers wherever the circus visited. The back of her pitch card read as “I am called the camel girl because my knees turn backward. I can walk best on my hands and feet as you see me in the picture. I have travelled considerably in the show business for the past four years and now, this is 1886 and I intend to quit the show business and go to school and fit myself for another occupation”.

Harper received a $200 per week salary, a huge sum in those days, comparable to about $5000 per week today and she was often accompanied on stage by an actual camel. After leaving the circus to pursue an education, Ella Harper disappeared from the public eye and not much is known about her life after that.

It’s known that she returned home to Sumner County, Tennessee and was living there with her mother and a niece according to the 1900 census. On June 28th 1905 she married Robert L. Savely and a year later she gave birth to a girl, Mabel E. Savely, who sadly died in November of that year.

Ella Harper died on 19 December 1921 in Nashville of colon cancer at the age of 51, and was buried in Spring Hill Cemetery, in Nashville, Tennessee at her parents’ family plot.

The Paranormal Abilities of Eleonore Zugun: Genuine Or Fraud?