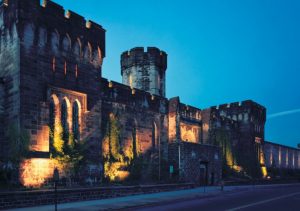 The prison was an experiment to reform criminals. Inmates were held in solitary confinement, sometimes leading to insanity. Phantom sounds and shapes are heard and seen.

The Quakers, a pacifist Christian denomination, lobbied the Pennsylvania legislature to erect a prison that wouldn’t punish criminals, but would reform them via reflection and seclusion, believing this would make them penitent, causing them to change their ways. (As a result, the word penitentiary was coined.) The new prison was approved in 1822.

Eastern State Penitentiary’s exterior resembles a fortress placed in the middle of Philadelphia’s Fairmont district. John Haviland designed the prison so that cellblocks radiate from a castle-like turret in the center, facilitating the guards’ responsibility to watch the inmates.

The first inmate was Charles Williams, a burglar sentenced to two years. At that time, the warden greeted new prisoners. Inmates’ names were changed to their cell’s number.

Whenever they were out of their incarceration rooms, prisoners had to wear hoods so they couldn’t see each other. Any form of communication with other prisoners, newspapers and visitors were banned. Singing was forbidden.

Ministers gave sermons while walking in prison corridors. Inmates were allowed to exercise for an hour in tiny yards connected to their small, damp, gloomy, malodorous cells. Reading the Bible was the only other diversionary activity permitted.

While flogging was prohibited, there were other forms of punishment for infractions, some equally harsh. Denial of meals, being chained to a wall, no blankets in winter and solitary confinement in darker cells were some of the penalties.

Another involved a prisoner, bare from the waist up, being chained outside in cold weather while water was sprayed on him. Another, more brutal, was the iron treatment. A chained piece of the metal was placed on the inmate’s tongue and attached to handcuffs.

If the man moved his arms, the iron went deeper into his mouth. At least one prisoner died as a result of this punishment.

As horrible as conditions were, the food and medical care were superior to those in other prisons. Inmates were allowed to work and those who had no trade were taught one. This wasn’t considered a diversion. 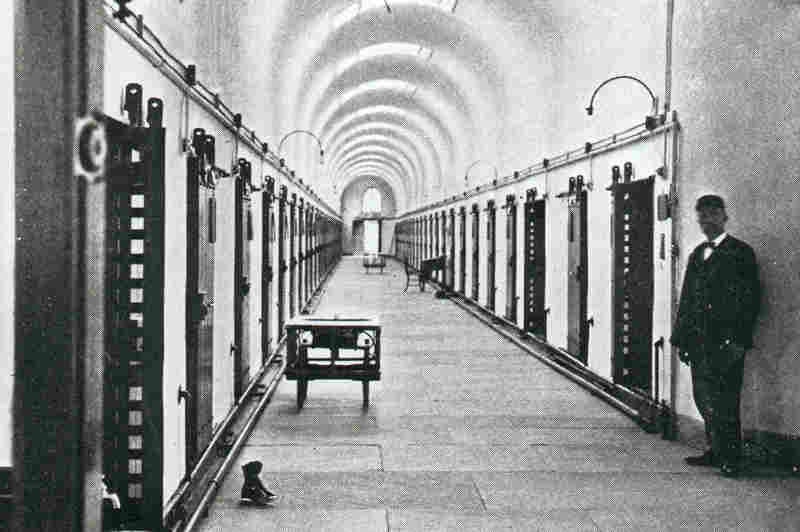 The number of prisoners who became insane due to the inhumane treatment is unknown. Prison officials, when there were public outcries about solitary confinement, denied it could cause “lunacy.”

Over the years, because of overcrowding and insanity, conditions improved until the facility was just another over-populated penal facility.

Willie Sutton, Al Capone and, according to legend, Pep, the dog that killed the Governor’s cat, served time there.

Eastern State Penitentiary, as such, closed in 1971. Today it is a National Historic Landmark and host to ghost and other tours.

In Cell Block 12, visitors and workers hear meaningless, far away laughter resound in some of the cells. No source has been found.

Witnesses report seeing shadowy forms and ghostly figures in corridors and cells. Cell Block 6 has been the site of most of the spectral shapes.

A locksmith was doing restoration work when he felt he was being watched. He turned around to see who was there and saw no one. Moments later he had the same feeling. When he looked again, he saw a black shadow leap across the corridor.

Others have said they feel someone is watching, but haven’t seen anyone or anything. The program director for Eastern State will not stay there overnight.