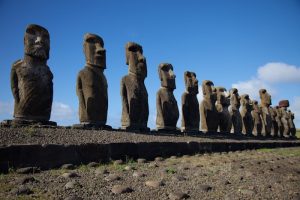 Easter Island, or Rapa Nui, is in the south Pacific Ocean and lies about 2000 miles from the western coastline of Peru. Created by a volcanic eruption on the ocean floor, it is separated from the other Polynesian islands by huge expanses of sea.

The island itself only occupies 45 square miles, and has 3 volcanic craters. Now lakes, they are some of the few areas of fruitful nature, for the rest of the island is rather desolate and barren. Nevertheless, it’s not at all times been like this, and there remains proof that the land was once rich in flora and fauna.

The 1st time the outside world knew about Easter Island was when a Dutch admiral called Jakob Roggeveen stumbled across it on Easter Sunday, 1722. When he landed, he found a backward race which lived in caves and rudimentary huts, and practised cannibalism.

What truly astonished him were the massive stone carved figures, or ‘moai’, that stood on guard around the island. Modern research have revealed there are something like a thousand of these great statues, standing between 12 and 25 feet high, and weighing up to 20 tonnes. The largest one is 65 feet tall and weighs 90 tonnes. Nevertheless, when Roggeveen stepped ashore, many of these figures had been torn down by the fierce natives.

The origin of the Easter Island race is an issue of contention. One early visitor to the island after Roggeveen was Captain James Cook. Cook had a Hawaiian sailor aboard his ship who could understand the Easter Island native tongue. This suggested that they spoke Polynesian, and indeed the general consensus is that they were descended from a distant Polynesian tribe.

There is also a celebrated theory that they actually came from South America which is supported by the fact that bulrushes and sweet potatoes found on the island were said to be imports from that continent. There were also considerable similarities between pre-Inca American cultures and the examples of Easter Island culture, although it is believed there may have been an early trading industry between Easter Island, South America and the Polynesian Islands.

The Easter Island race probably settled on the island sometime around the middle of the first millennium AD, and began building their statues quite soon afterwards. The early Easter Islanders developed a precise technique for creating the stone men out of the walls of the volcanic craters.

Using a system of logs and ropes, they would sit the moai on a funerary platform, called an ‘ahu’, under which the remains of dead elders were buried. It is believed the stone figure acted as a talisman, guarding and protecting the clan of the dead islander, although some experts suggest the islanders ended up erecting the statues purely for the joy of making them. Archaeologists have also discovered wooden tablets called ‘talking boards’, which describe ancient religious rites of the old culture.

The Easter Island story is the archetypal island version of paradise lost. When the first Polynesian immigrants landed on the island it was a land of bountiful natural produce. There were great forests, sugar beet crops, exotic fruit and native meat sources. In these conditions the people flourished.

They built fine houses and enjoyed life, but in around AD 1500 a new cult called ‘Makemake’ or ‘the cult of the birdman’ sprang up. This may have signalled the arrival of a new tribe from across the sea, and soon afterwards overpopulation and wasteful island management caused the crops to fail and the natural resources to be depleted.

The different clans and tribes began warring, even overturning each other’s statues, and legend on the island recounts a terrible battle between tribes of ‘long ears’ and a tribe of ‘short ears’.

Within a couple of centuries, Easter Island was the barren waste populated by savages discovered by Roggeveen. The life of islanders only grew worse. The inter-tribal conflicts continued until 1862, when ships arrived and enslaved a thousand of the island’s fit men to work in the Peruvian mining industry.

These islanders quickly grew ill in the strange continent, and the few that returned home brought back diseases. Smallpox and leprosy reduced the native population to 111 by 1877. European missionary workers helped the people of Easter Island survive, but many of the secrets of the island’s strange stone faces were lost forever.