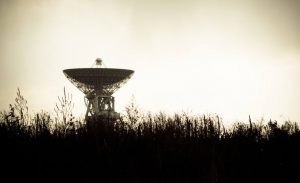 Some of the world’s leading astronomers – including Great Britain’s astronomer royal, Sir Martin Rees — believe aliens, rather than using different radio waves or visible light to signal, may be using an entirely different communication medium such as ghostly neutrinos or with gravitational waves (ripples in the fabric of space-time) or using communication mechanisms we cannot begin to fathom.

“The fact that we have not yet found the slightest evidence for life — much less intelligence — beyond this Earth,” said Arthur C. Clarke, “does not surprise or disappoint me in the least. Our technology must still be laughably primitive, we may be like jungle savages listening for the throbbing of tom-toms while the ether around them carries more words per second than they could utter in a lifetime.”

Lord Rees, a leading cosmologist and astrophysicist who is the president of Britain’s Royal Society and astronomer to the Queen of England believes the existence of extraterrestrial life may be beyond human understanding.

“They could be staring us in the face and we just don’t recognize them. The problem is that we’re looking for something very much like us, assuming that they at least have something like the same mathematics and technology.”

“I suspect there could be life and intelligence out there in forms we can’t conceive. Just as a chimpanzee can’t understand quantum theory, it could be there as aspects of reality that are beyond the capacity of our brains.”

Frank Drake, the founder of SETI and Drake’s Equation, believes that satellite TV and the “digital revolution” is making humanity invisible to aliens by cutting the transmission of TV and radio signals into space. The earth is currently surrounded by a 50 light year-wide “shell” of radiation from analogue TV, radio and radar transmissions. According to Drake, digital TV signals would look like white noise to a race of observing aliens.

Although the signals have spread far enough to reach many nearby star systems, they are rapidly vanishing in the wake of digital technology, said Drake. In the 1960s, Drake spearheaded the conversion of the Arecibo Observatory to a radio astronomy center. As a researcher, Drake was involved in the early work on pulsars. Drake also designed the Pioneer plaque with Carl Sagan in 1972, the first physical message sent into space. The plaque was designed to be understandable by extraterrestrials should they encounter it.

Milan Cirkovic of the Astronomical Observatory in Belgrade, points out that the median age of terrestrial planets in the Milky Way is about 1.8 gigayears (one billion years) greater than the age of the Earth and the Solar System, which means that the median age of technological civilizations should be greater than the age of human civilization by the same amount. The vastness of this interval indicates that one or more processes must suppress observability of extraterrestrial communities.

Since at this point, there is no direct and/or widely apparent evidence that extraterrestrial life exists, it likely means one of the following:

Or is it (B) that many advanced civilizations have existed before us, but without exception, they have for some unknown reason, existed and/or expanded in such a way that they are completely undetectable by our instruments.

Or is it (C) There have been others, but they have all run into some sort of “cosmic roadblock” that eventually destroys them, or at least prevents their expansion beyond a small area.

Since Earth’s placement in space and time appears to be unremarkably random, proposition “A” seems fairly unlikely. Assuming humans evolved like other forms of life into our present state due to natural selection, then there’s really nothing all that mystical, special or remarkable about our development as a species either. Due to the sheer numbers, there are almost certainly other planets capable of supporting at least some form of life. If that is so, then for Earthlings to be the very first species ever to make a noticeable mark on the Universe, from a statistical perspective, is incredibly unlikely.

For proposition “B” to be correct would defy all logic. If potentially thousands, or even millions of advanced extraterrestrial civilizations exist in the known Universe, then why would all of them, without exception, choose to expand or exist in such a way that they are completely undetectable? It’s conceivable that some might, or perhaps even the majority, but for all of them to be completely undetectable civilizations does not seem likely either.

Proposition C in some ways, appears to be more likely than A or B. If “survival of the fittest” follows similar pathways on other worlds, then our own “civilized” nature could be somewhat typical of extraterrestrial civilizations that have, or do, exist. Somehow, we all get to the point where we end up killing ourselves in a natural course of technological development and thereby self-inflict our own “cosmic roadblock”.

The Aiud Artifact: Part of the Ancient UFO?