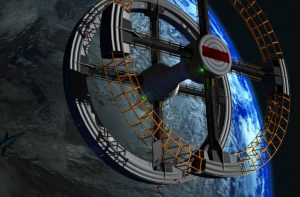 The exploration of space inevitably leads to its colonization. On the other hand, the excessive use of the Earth’s natural resources will make our planet uninhabitable sooner or later.

Billionaire Jeff Bezos believes that people should move to space in the future and recognize the Earth as a nature reserve.

Jeff Bezos owns the space company Blue Origin and competes with SpaceX and VirginGalactic companies. During the annual forum at the Washington National Cathedral, he said that humanity should leave Earth and settle in space stations to prevent our planet from being destroyed.

According to the billionaire, civilization is constantly growing and consuming more and more resources, so people should live in space stations with artificial gravity in the future.

Bezos argues that up to a trillion people can live in space colonies, and if the Earth survives, humanity should extract resources and produce energy outside the Blue Planet.

Of course, the construction of space colonies also requires resources, and our civilization is not yet sufficiently developed to scoop them from asteroids or other planets.

Thus, the implementation of the idea of Jeff Bezos will require the extraction of more earthly resources. And if space colonies were to be created from resources obtained from off-Earth, the billionaire’s plan would be realized in the very distant, indefinite future.