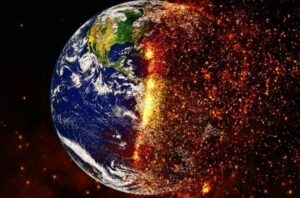 At the current rate of activity, humanity will inevitably lead the planet to a catastrophe. By the year 2500, the earth is threatened with a warming of 9 degrees (48.20 °F), which will lead to the mass death of all life.

Scientists have analyzed climate change caused by human activities, and came to the conclusion that we are expecting a mass, sixth in a row, extinction on Earth.

Kunio Kaiho, a climatologist from Tohoka University, has identified a pattern linking the temperature of the earth’s surface and the diversity of life on Earth. His research confirmed that an increase or decrease in the average earth temperature causes the death and disappearance of many species of flora and fauna.

History knows five global temperature catastrophes on Earth. A decrease in temperature by 7 degrees (19.40 °F) led to global cooling, mass extinctions of species and extinctions of plants and animals. Global warming by 9 degrees (48.20 °F) has led to no less disastrous results.

Scientists’ forecasts settled on an upward temperature change of 5.2 degrees (41.36 °F), which, according to previous estimates, could lead to a mass extinction.

Environmentalists around the world and conservationists are striving to control temperature changes and are trying to bring the Earth’s temperature to levels 1.5 degrees cooler than before the industrial revolution.

Scientists have warned that at the current rate of pollution of the planet, we are threatened with warming by 4.4 degrees before the end of the century, which means that it threatens with global extinctions of many species of living beings.

And warming at a critical 9 degrees, according to Kunio Kaiho, will come by 2500.

In the 1950s, the CIA sprayed a entire French city with LSD