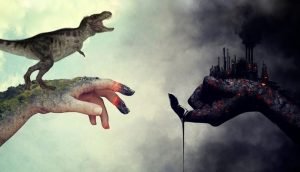 Anthony D. Barnosky, a Stanford biologist whose work involves using fossils to map changes in ecosystems over time, told CBS that, according to his research, the rate of extinction today is about 100 times the rate typically seen in the four billion years of life on Earth.

This rapid population loss means the Earth is currently experiencing its worst mass extinction event since the dinosaurs, Barnosky said. And although the Earth itself has repeatedly recovered from mass extinctions, the vast majority of living organisms that existed on our planet at that time did not recover.

Unfortunately, we humans, or at least the attributes of our technological civilization, may well be one of them.

“I and the vast majority of my colleagues think it’s over for us,” Barnosky’s Stanford colleague Paul Ehrlich, who also appeared on the show, told Pelley, “the next few decades will be the end of the civilization we’re used to.”

This grim reality, according to the researchers, means that even if humans manage to survive in one capacity or another, the massive effects of the mass extinction, including habitat destruction, disruption of the natural food chain, soil infertility, and more, will lead to the collapse of modern human society.

“I would say it’s too much to say that we’re killing the planet, because the planet will be fine,” says Barnosky. “What we’re doing is killing our way of life.”

In other words, if people do not radically change their course, then the chaos that we saw on the planet will reflect very unpleasantly on ourselves. This is a grim warning, but shared by other experts.

Paul R. Ehrlich, it’s worth noting, is something of an icon of overpopulation and mass extinction. He published Population Bomb, one of the first modern books on the dangers of human overdevelopment and population growth, back in 1968 and was considered an alarmist for the controversial predictions he made at the time.

While not all of his controversial predictions came true, two big ones – that greenhouse gases would melt the polar ice caps and that humanity would overwhelm wildlife – have undoubtedly materialized since then. And, unfortunately, his rationale for implementing them seems depressingly familiar.

According to Ehrlich, the problem is “too many people, too much consumption and growth mania” – a reality few would argue with that is showing any meaningful signs of slowing down.

“Humanity is unsustainable. To support our way of life for the entire planet, we will need five more planets,” Erlich told his interlocutor. “It is not clear where they will come from.”

“Mankind is very busy sitting on a branch, which he saws off himself,” the 90-year-old researcher added.