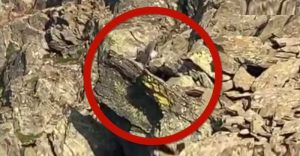 This video (see below) in the Swiss Alps was shot by German amateur photographer Mario Brol from Munich. But even despite the clarity and quality, it is very difficult to understand what exactly Mario filmed.

The German press, which writes about this incident, suggests that yeti or some mountain spirit was caught on camera, but according to some commentators, most of all it looks like a little man in a cloak with a hood and white beard. This creature looks like a real dwarf.

In the screenshots from this video, you can hardly see it, since he is wearing a cloak, almost merging with the stones surrounding him.

Some suggest that goat or other animal was caught in the video, but the creature seems to be dressed in some kind of clothes and even holds a staff in its hands.

The “dwarf” was filmed near the Oberalp mountain pass near the glacial Lake Lai da Tuma. According to Mario, he traveled along the Swiss Alps with his friend who first heard the suspicious rustling and saw several stones rolling down the slope, after which they both took a closer look and saw this creature on the rock.

Mario himself claims that the video is completely genuine, but he also admits that he does not know what he filmed.