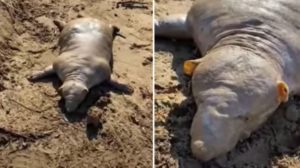 During a storm on the Greek island of Crete, a strange beast was thrown ashore. Locals have no idea what exactly this creature is.

The animal has absolutely no hair, it resembles a small hippopotamus with four legs.

Photos have been posted on the Internet showing a very strange animal. People began to say that the creature simultaneously resembles several different animals, namely a dog, a pig, a seal, but at the same time it cannot be attributed to any of these species.

A heated discussion is also taking place on the island itself, which is the largest in Greece. Some local residents said that they were afraid of this strange animal, while others found it incredibly interesting and would like to know what it is and where it came from.

Petros Limperakis, who holds the position of curator of vertebrates in one of the museums on the island, suggested that the creature may well turn out to be a badger. He believes that the animal lost its hair after being in water for a long time. Also, it is the water that is the reason that the creature is very swollen and began to look really creepy.

Soon, the creature will need to be identified, and for this it will be necessary to complete several genetic texts.