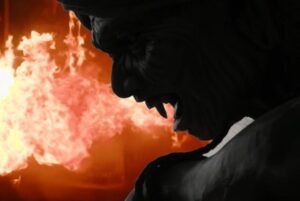 A TikTok user claims he ‘went to Hell’ after suffering a heart attack. He described what he saw as an agonizing ordeal that changed his life forever, and said he “would not wish this on even my worst enemy.”

In February 2016, a man named Gerald Johnson had a heart attack and suddenly found himself in some very scary place.

“Absolutely, I’ve seen real Hell. I’ve been there. And I wouldn’t wish that on even my worst enemy, I don’t care what that man did to me.”

“I thought I had a heart attack and my spirit left my physical body and I thought I was going up (to Heaven) because I thought I had done so many good things in this life and helped so many people, but instead of going up, I went down. I went like to the center of the earth.”

“What I saw was literally indescribable and it makes me emotional every time I talk about it.”

Johnson says that one of the things he saw there was a man on all fours, like a dog, who was burned from top to bottom and wore a chain around his neck. And the demon held him by the other end of the chain.

“I knew that this demon was sent in this man’s life to ride him from his childhood to the time that he died.”

Then Gerald heard a song playing, and the words were as ordinary as those we hear on Earth from popular artists. However, instead of glamorous pop stars, this song was sung by demons.

“Every line in every song tormented you because you didn’t worship God through music while you were on Earth.”

Gerald then revealed how he finally escaped Hell and made it back to Earth.

“I lifted up out of hell and I came back on the Earth and god began to speak to me. I actually saw the real Jesus,” he said.

“These are not your people these are my people, I only want you to focus on the assignment that I am giving you.

“Although I did good, the thing that I had in my heart was unforgiveness to people who have done me wrong.

Gerald’s video has been viewed three million times and garnered thousands of user comments, many of whom said his story resonated with them.